​A very common concern that you may see while browsing tarantula message boards is mites either in a tarantula's enclosure or on the tarantula itself. The concept of mites is very concerning and can make quite a few owners paranoid about these tiny creatures infesting and harming their tarantulas in some way.

This post will be the ultimate guide on tarantula mites and will cover exactly what they are, how to remove them from an enclosure, and why you shouldn't actually be scared of them.

What Are Tarantula Mites?

First and foremost, it needs to be said that the overwhelming majority of mites that find their way into a tarantula enclosure are entirely harmless. These are primarily grain mites that are of the genus Acarus.

In short, these mites are scavengers that feed off of rotting organic matter. This can range from tarantula poop to old feeder insects to boli to even rotting substrate.

Such an eating habit actually makes these mites beneficial in small amounts as they help to keep an enclosure clean! This is very similar to springtails, which are welcome in tarantula enclosures.

​​Seeing a few mites crawling around in the substrate may not be very concerning, but seeing them cling to your tarantula can definitely set up a few alarm bells. Fortunately, these likely aren't parasites, and they're as harmless as the mites that live on a tarantula's substrate.

When mites can't manage to scavenge up any more food, they decide that they need to go off in search of more food. However, these are very small creatures, so walking isn't a great option for them.

Instead, mites will use a tarantula as a method of transportation to get from one place to another. They do this by climbing onto a tarantula, searching for a place with softer, exposed skin, and biting down with their "mouth".

Not only will this provide the mite with a great method of transportation, but it will also give some of them direct access to food that a tarantula is eating!​

While this is gross, at this point the mites are still totally harmless. They don't damage the tarantula's skin with their bite, and they don't suck hemolymph like leeches. What they do, though, is multiply rapidly.

When conditions are right, you could end up with hundreds or thousands of mites within just a few weeks. This is when they will start to become a problem in regards to a tarantula's food supply.

​How To Get Rid Of Tarantula Mites

First of all, you need to be calm and act smart. Simply trying to pick the mites off of your pet tarantula can result in serious harm due to the fact that they're bit down hard on your tarantula's exoskeleton. Instead, you'll need to take a more creative route -- one that seems a bit counter-intuitive at first.

​​​Bait the mites off of your tarantula by placing a small piece of rotting matter, whether it be a dead insect or a piece of fruit, in the enclosure. Within a few hours, many of the mites should move off of their tarantula transportation to get a piece of their meal.

Once a good amount of mites have swarmed around the food, remove it and the mites from the enclosure and dispose of them. Repeat this process until all of the mites have been removed. 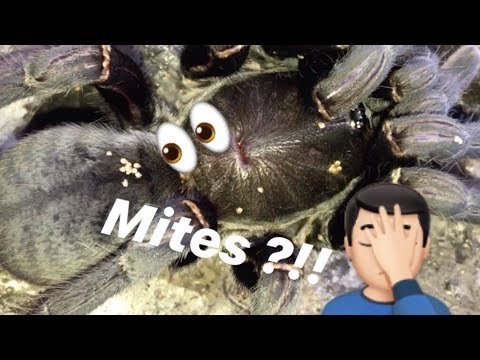 ​​If untreated, mites can absolutely overrun a tarantula's enclosure. This will massively distress your tarantula, and will require quick action to correct.

First of all, you'll need to clean and wipe down every single surface that can be wiped down. This is done to remove any straggler mites and to clean any remnants of food left behind. Do this several different times throughout the day.

Make the enclosure uninhabitable for the mites. 50% humidity is about the minimum that they can survive at, so consider bringing the humidity levels down to that point or even lower.

Note that if you're doing this, you'll need to keep the health of your tarantula in consideration. Arid species may be okay with this for a short time, but species that require lots of humidity may not be able to deal with it.

Then, replace the substrate. It's likely that there is a good amount of boli and food remnants within the substrate that prompted and fed the mite explosion. Keep the tarantula out of its enclosure until all traces of mites have been removed from its exoskeleton.

You could also consider getting springtails to add to your tarantula's enclosure. Since these do essentially what mites do, they'll compete with the mites for resources and will help to kill them off.

​Preventing Mites (Or Trying To)

Some owners think that fully sterilizing their tarantula's enclosure and the substrate within it will kill the mites and keep them away for good. While it will definitely kill the mites, it will simply create a pristine place for new mites or fungi to move into.

The best thing that you can do to keep the changes of having mites down is keeping the enclosure decently clean and removing any food remnants that could act as a food source for them.

Clean enclosures aren't immune to mites, but they're a lot less welcoming and don't provide sustenance as well.

While this post has covered the common harmless mites that occasionally take residence in a tarantula's enclosure, it hasn't yet mentioned parasitic mites that do still happen to exist. These parasitic mites are from the family Laelapidae and are incredibly rare without much scientific literature being written about them.

How exactly would a tarantula get exposed to these parasitic mites, then? They don't hitch a ride on feeder insects or substrate -- instead, they can only be found on wild-caught tarantulas.

So, if your tarantula isn't a wild-caught specimen, don't worry! It doesn't have parasitic mites and it isn't in any danger.

Even in the incredibly rare change that you are in possession of a tarantula that has parasitic mites, there still isn't much of a threat being posed. These mites attach to the edge of the carapace, and only suck very small amounts of hemolymph. In small amounts, they're virtually harmless as well.

There aren't a lot of detailed guides available regarding how to remove these mites, but it's a similar process to the non-parasitic ones. Thoroughly clean the enclosure, restrict moisture and food supply, and avoid pulling them off directly.

So, despite how frequently tarantula mites are discussed and stressed about within the community, they're actually quite uncommon and pose little to no threat to your tarantula's health.