Adding a new tarantula to your collection is always very exciting. With so many different species in existence, every addition is bound to bring something new and interesting to your home. No matter what tarantula you’re bringing home, though, you’ll need to supply them with the best possible enclosure. This enclosure should meet all of their environmental needs and keep them safe, secure, and happy.

This post will detail how to go about constructing the best possible enclosure for a terrestrial tarantula. It will go over what a terrestrial species needs in an enclosure, what products to purchase, and how to combine everything into the perfect home!

Before going into detail about how to create the perfect terrestrial tarantula enclosure, you first need to understand the specific environmental needs of terrestrial species. The objective here is to create an enclosure that very closely resembles the natural environment of one of these tarantulas. These creatures have evolved and developed for millions of years, so it’s essential that their enclosure provides a similar living experience to their natural habitat.

Note that every tarantula species is different. While terrestrial species will share many of the same general needs, each species will have specific requirements that should be met. Because of this, it’s important that you read up on the needs of your species in particular and know how to care for them in the best possible way.

​​Terrestrial tarantulas live in a variety of different climates and types of environments. However, one thing is common, and that’s that they are almost always living on the ground. These tarantulas rarely, if ever, climb structures larger than a rock.

When they’re not hunting or exploring on the dirt, terrestrials are deep within their burrow. A burrow is a characteristic feature of any terrestrial tarantula’s home, keeping them safe and isolated from​​​ the dangers of the outside world. This burrow is used as a sleeping area, hunting ground, and even as a place for de-stressing and relaxing. An enclosure setup featured on TarantulaCages.com. This enclosure features several inches of substrate, a large wood hide covering a burrow, and a plastic container acting as a water dish. Very simply yet effective!

​The first step of having the optimal terrestrial tarantula enclosure is purchasing the enclosure itself. This is the container that will house your tarantula and all of its accessories, providing a safe and secure home that’s similar to their natural environment. While this is an important step and piece of the enclosure, it’s not difficult to get right.

If you’d like supplemental reading on this topic, we’ve already published a comprehensive guide to choosing the right enclosure for your tarantula. Definitely give this post a read to fully understand tarantula enclosures.

So, what exactly defines an optimal tarantula enclosure? The best enclosure has all of the following characteristics:

We here at Beyond The Treat don’t like to take any shortcuts or cut costs when it comes to our pets. So, while there are some great plastic containers that can be turned into an appropriate enclosure, there are some available that are simply too good to not utilize. 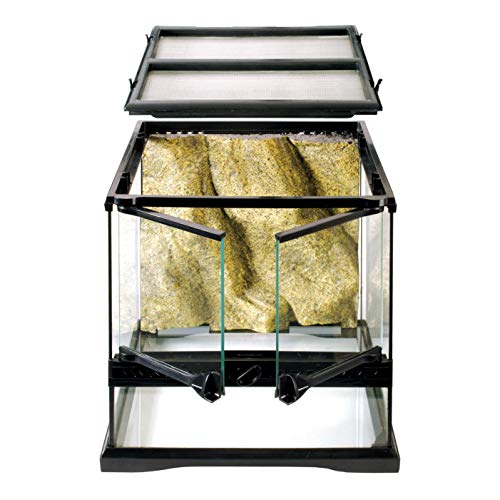 To begin with, it features 144 square inches of floor space and several inches of depth for substrate to be placed. On top of that great floor space, it features a waterproof base, raised base to help with heat distribution, and a decorative and textured backdrop to help tie the enclosure together. There are dual doors on the front of the enclosure that are secure and allow for excellent accessibility within the enclosure for both cleaning and feeding. The screen top provides great natural lighting and ventilation in the enclosure as well.

Owners of this enclosure tend to be very happy with it, stating that it more than meets their needs. The security of the enclosure is a benefit that’s commonly stated as owners never have to fear for their tarantulas escaping or harming themselves in any way. The fact that there’s so much space is also a benefit as burrows are able to get quite deep.

One more thing to note about this enclosure is the height. It’s not too tall to where it could pose a threat to a terrestrial tarantula that climbed the side, but it’s tall enough to give you plenty of room to maneuver around inside of it. Overall, it’s a very suitable enclosure for terrestrial species. Jamie’s Tarantulas’ take on a terrestrial tarantula enclosure. This one has a large bark hide on top of a more dirt-like substrate. Silk leaves and sphagnum moss adorn the hide to give a much more natural appearance.

​Once you’ve purchased the optimal enclosure, it’s time to get a bit creative and start to put together all of the necessary components. During this stage, you can take several different approaches. Some owners want to go more utilitarian and create very simple enclosures that get the job done, while others want the enclosures to look as authentic and close to nature as possible.

​The substrate is the bread, butter, and literal foundation of your terrestrial tarantula’s enclosure. Substrate is, in short, the material that covers the bottom of the enclosure and acts as the dirt that a terrestrial tarantula would naturally live on. This component has many different benefits to an enclosure that simply can’t be achieved through other means.

To begin with, this substrate will do wonders for humidity and moisture control within the enclosure. A high-quality substrate will be able to hold and retain moisture for long periods of time, providing a consistent level of humidity within an enclosure (which is exactly what tarantulas need). It will do this without rotting or molding, keeping the enclosure healthy to live in.

​Substrate also helps to keep the enclosure clean by absorbing waste materials and locking them in until the substrate is changed. This can help to control odors and keep an enclosure feeling much more fresh.

Finally, and most importantly, substrate provides a material that can be burrowed into. Remember how terrestrial tarantulas spend the majority of their time hidden away in their burrow? A quality substrate will allow a tarantula to burrow into it and create a home that keeps them safe for months or even years.

Placing about 6 inches of this substrate on the bottom of the enclosure and moistening it with water is by far the most important thing that you can do for your terrestrial tarantula’s enclosure.

In fact, we believe that hides are so important for a tarantula enclosure that we’ve created an entire post all about tarantula hides!

A hide is primarily integrated with a tarantula’s burrow to create a sort of overhang or entrance to the burrow below. This adds an extra layer of protection and reinforcement to the burrow to help it last for a very long time.

Additionally, tarantulas utilize hides to help them de-stress by feeling safe and secure. Some external stimuli may randomly make a tarantula fear for its safety, so a readily-accessible hide is a great place for them to run to during this period.

Hides also greatly diversify an otherwise flat enclosure by providing a large surface for tarantulas to crawl on and attach webs to. Such a simple piece of material like a section of cork bark helps to take tarantula enclosures to a different level, and they tend to provide those benefits for years upon years. Waidon Nielson’s take on an enclosure for his Chilean Rose Hair. Lots of detail has gone into this enclosure, featuring several fake plants, a large water dish, two incorporated hides, and natural-looking substrate.

Water bowls are so important to a tarantula’s enclosure that we’ve written an entire guide on supplying tarantulas with water. If you’re doubtful about the importance of water bowls, give that post a read to educate yourself about their benefits. Some of those benefits include:

Best practice involves placing this water bowl in the corner of a tarantula enclosure, pushed somewhat into the substrate so that it stays in place. Owners use a variety of different objects as water bowls, ranging from store-bought bowls to bottle caps to little single-stud LEGO pieces for the really small slings.

The accessories listed above are the essential parts of a terrestrial enclosure, but that’s not everything that’s available to put into the enclosure. Depending on whether or not you want to make your tarantula’s enclosure look more natural or give them more materials to climb on and build webs off of, you can add a few more things to take it to the next level.

Rocks are a great addition to any terrestrial enclosure. A few small, differently-shaped rocks spread throughout the enclosure will help to add some much-needed diversity to the flat substrate that makes up most of the floor space. Heavier webbing tarantulas will also love to attach their webs to these rocks and create quite a spectacle.

Plants are also nice decorative pieces! It’s highly recommended that you use fake plants, though, as real plants have needs that don’t really align with those of a tarantula. Regardless, these fake plants will help to hold extra moisture from misting, they’ll act as an extra hiding place, and they’ll also serve as an anchor point for webs. This terrestrial tarantula enclosure took design to the next level. It has several inches of substrate at the bottom, a hide pushed into the substrate, branches, and fake leaves scattered about. A very diverse yet function enclosure.

Once you’ve built the enclosure, you need to be sure to properly maintain it! Fortunately, this is a very easy task that doesn’t take up much time at all. The main idea here is consistency, as regular maintenance will make the job much easier for you and the enclosure much safer for your terrestrial tarantula.

First of all, maintaining good substrate is a key component of the maintenance. Tarantula substrate doesn’t need to get changed out very frequently — really only when it starts to get noticeably old and dirty. In-between total replacements of the substrate, though, you should go through and periodically remove food waste from the enclosure like carcasses and boli.

Speaking of cleaning, wiping down different surfaces with damp paper towels will help to keep the entire enclosure clean and safe for the tarantula. Be sure to always use water while cleaning, as cleaning chemicals can be fatal to tarantulas. If you have a particularly vicious tarantula (such as any old world species), you will want to move them into a smaller holding tank for the cleaning process.

Finally, keeping a consistent humidity level is a huge portion of enclosure maintenance! Tarantulas all have different levels of humidity that are optimal for their health. You’ll need to keep a close eye on the hygrometer in the enclosure, refill the water bowl daily, and spray the substrate with water as needed. If an enclosure dries out, it may be a death sentence for your tarantula.