​​Tarantulas often come in many different sizes and patterns. Some have long legs, some have striped or spotted patterns, and some prefer warmer climates than others. With so much variation in a tarantula’s feature, it’s no wonder why some collectors have a difficult time telling them apart.

Fortunately, we’ll be taking a deep dive into one specific type of tarantula, so that you know how to differentiate it between other tarantulas you own and how to properly care for it. Without further ado, here is a guide for learning about and caring for a Cameroon Red Baboon (Hysterocrates gigas) tarantula!

Given the ‘red’ in its name, you might expect to be the Cameroon Red Baboon tarantula to be mostly red. However, the red coloration only appears in between molting phases. Most of the time, it appears black after a fresh molt, and then turns brown when it is ready to start molting again.

This varying coloration can help collectors keep track of when this tarantula has molted, in between molting, and will molt again.

As for its size, Hysterocrates gigas tends to grow up to 6-7 inches in length. Its other nickname is the Giant Baboon spider, and for good reason. This tarantula can potentially grow up to 9 inches in length, so keep that in mind when choosing the proper enclosure.

Be mindful that these tarantulas grow quite fast, so expect multiple molting periods during its first two years of life as they outgrow their spiderling stage.

While these male tarantulas can grow to a much larger size, female tarantulas tend to have a longer lifespan—up to 16 years in comparison to a male’s 4 to 5 year lifespan. Both size and gender are important factors to consider when caring for Hysterocrates gigas. Don’t let the small size and fuzzy hair fool you! Due to poor eyesight, Hysterocrates gigas possess a somewhat aggressive nature, sometimes attacking in directions where they sense rapid movements and fluctuations in light levels. While not venomous enough to be lethal to humans, their bite can leave quite the sting!

Although most of the time, these small-eyed, nocturnal spiders may choose to hide instead of attacking directly, they can go on the offensive when they feel their territory is being threatened. Collectors should be wary when working around a Hysterocrates gigas, as they often don’t provide much visible warning for when they are preparing to strike.

While they may not be the cuddliest of critters, Cameroon Red Baboons tend to be very communal, willing to share their burrow with others of its own kind. As an old world species of tarantula, they don’t possess urticating hairs on its body like most other tarantulas have that shed in defense.

When they are not digging complex burrows, these spiders also enjoy being around water! They are not afraid to take a quick swim, especially if they are feeling threatened, submerging themselves underwater to avoid some land-based predators.

​​With this in mind, you may want to consider including a somewhat moist substrate when crafting a habitat for its kind. In their homeland of Cameroon, these spiders commonly build complex burrows around surface level of rain forests and jungles.

Use around 5 inches of damp, yet firm substrate so that the Hysterocrates gigas will have enough room to properly burrow in its enclosure. The optimal enclosure size should be roughly 8-10 gallon container.

You do not have to worry about the webbing that this spider produces, as they produce low quantities of silk. When silk is produced, it is most often used just to cover the entrance and insides of its burrow.

As most of these types of spiders are found in subtropical climates, they do prefer living in areas of high humidity resembling that of Central Africa. Therefore, you would want the enclosure to be heated anywhere in the range of 75°F to 80°F with a humidity of 80% to 85%. Fortunately, most homes already maintain this temperature, so you will rarely need to adjust your temperature settings to accommodate a Cameroon Red Baboon. 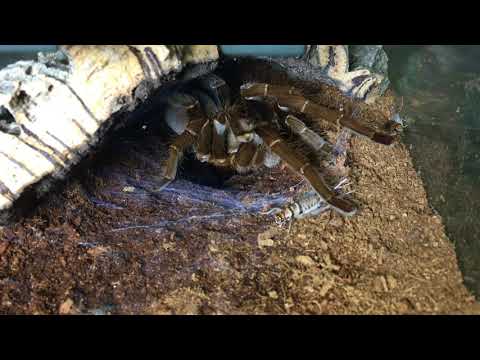 ​​Tarantulas held in captivity don't tend to run into any health problems throughout their lives. If you supply your ​​Hysterocrates gigas ​with a healthy diet and safe environment, there shouldn't be any problems that come up. ​Parasites/mites and dehydration are sometimes experienced by captive tarantulas, but those ailments are quickly and easily dealt with.

​​​​​​There are two important things to note when it comes to this species of tarantula. ​To begin with, burrows are an absolutely essential part of their enclosure. In the wild, this species creates elaborate burrows that help it feel safe and secure. Without a way to create these burrows, they may start exhibiting signs of stress.

Additionally, ​tarantulas have the possibility of getting stuck in their molt. ​If this occurs, you'll need to quickly help Hysterocrates gigas complete its molt. ​Luckily, there are many online guides ​that detail how exactly you should go about helping a stuck molt safely.

Due to its aggressive nature, the Red Baboon is difficult to come by, and most likely will not be available at your local pet store. Fortunately, a select online community is devoted to acquiring spiders of this kind. For instance, Underground Reptiles has the ​Hysterocrates gigas tarantula available for as low as $20 for young slings, and this even includes a safe arrival guarantee!

​Overall, for $20, you absolutely can't beat the uniqueness and entertainment that this tarantula species brings to the table. It possesses traits that aren't really seen in other tarantulas, making it a must-have for any serious collector or tarantula enthusiast. 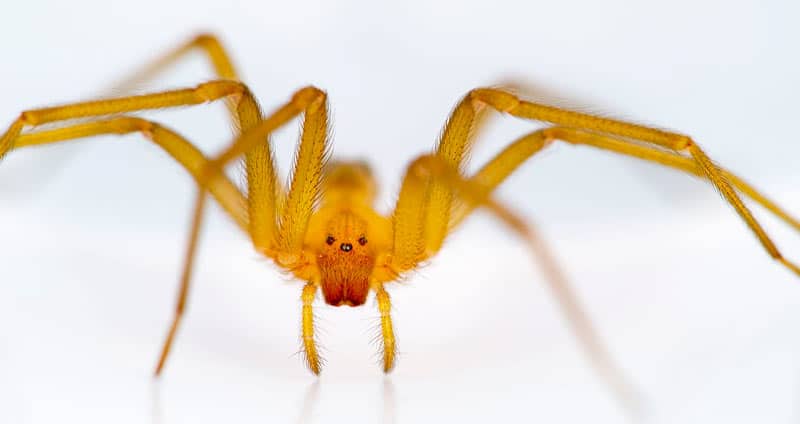