Also known as the Brazilian Red and White Tarantula, Nhandu chromatus is an extremely popular yet very unique tarantula. Looking at many different tarantula collections, you'll be hard-pressed to find one that doesn't feature this incredible species.

Their appearance is stunning, they have an interesting personality, and their price is tempting for beginners and experienced keepers alike.

​Before you bring home a ​Nhandu chromatus, there are several pertinent pieces of information you need to know about it. This post will cover the ​Brazilian Red and White's ​great appearance and personality, ​in addition to its environmental and general care needs.

At first glance, there doesn't seem to be too many unique characteristics pertaining to this tarantula. However, after spending just a few minutes observing Nhandu chromatus, you really start to appreciate its subtle beauty.

It has a velvety-black base color with contrasting white stripes on the legs, a pale blond carapace that darkens with age, and striking red abdominal hairs.

The hairs on this species go beyond just beautiful colors. As it is a new world tarantula, Nhandu chromatus has urticating hairs that it can flick at any threat. These hairs, while very effective, also appear more striking than the hairs of other tarantulas.

In terms of sizing and overall growth, this species isn't unlike other Brazilian tarantulas. Most Brazilian species reach adulthood in 3-4 years, developing a leg span of 6 to 7 inches in the process. This size may surprise people once they hear that these tarantulas eat birds in the wild.

Compared to other bird-eaters, this species is a bit on the smaller size! However, its long, slender legs and striking build definitely make it appear larger than it actually is. ​​​Every single tarantula is different, regardless of their species or specific origins. Therefore, it's difficult to give blanket statements regarding temperament -- especially for this particular species!

However, there are some very common temperamental characteristics of Nhandu chromatus that are true for most specimens. It's important to note that with the correct training, most specimens can be trained in one way or another.

This species of tarantula is indigenous to Brazil, meaning that it is a new world tarantula. New world tarantulas are species that are known for their more laid-back attitude, flight-over-fight response, and defensive urticating hairs.

In short, new world tarantulas are typically good choices for beginner tarantula owners as they're generally nice to work with and handle. Unfortunately, the Brazilian Red and White goes against the grain here.

Uncharacteristically for new world tarantulas, this species tends to be quite aggressive and defensive, always willing to jump into a defensive stance and flick its particularly irritating hairs at their "attacker".

If you enter their enclosure, Nhandu chromatus will likely throw up a defensive pose and then scamper away to their burrow to hide. Such a personality results in this species not being recommended for beginners.

​If you're looking for a more calm tarantula, all is not lost! There are many specimens that are a lot more calm than others. They may throw up a defensive pose, but don't resort to flicking their hairs. Additionally, with proper handling and given enough time, your tarantula may grow to trust you and be more comfortable around you.

One more factor that potential owners like to be aware of is if their tarantula will spend all day in their burrow or not. While it's true that Nhandu chromatus is a burrowing species, it tends to spend a lot of time out of its burrow once it matures.

This makes it an excellent display tarantula that's absolutely fantastic to observe.

If you plan on bringing home a Nhandu chromatus, whether it be for your own enjoyment or for breeding, you need to be aware of what their environmental needs are.

Since these are tarantulas that are quite quick and aggressive if messed with, you'll want to create an enclosure that requires very little interaction and tampering with.

​To begin with, the natural environment of this tarantula should be heavily considered. ​Brazil features quite a few different climates, but has the general theme of being quite hot and humid. Temperatures average around 77°F with rainfall averaging about 90 inches a year.

Because of this, their enclosure should be similar to a forest or savanna of Brazil with good humidity. Fortunately, this isn't much different from the environmental requirements of most other tarantulas. 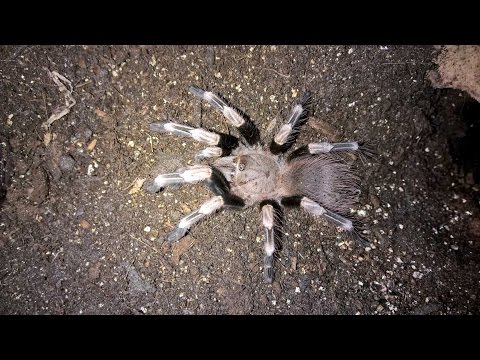 Nhandu chromatus have special requirements for their enclosures, but those requirements aren't difficult to meet at all. To begin with, this is an opportunistic burrowing species, meaning that it needs a burrow in its enclosure for it to stay happy and healthy.

The enclosure's height shouldn't be too tall, and it should have plenty of floor space for the tarantula to run around without feeling cramped.

For a single specimen, the recommended enclosure is an Exo Terra 18"x18"x12" terrarium. With 324 inches of floor space, it provides Brazilian Red and Whites with more than enough room to explore, burrow, and web.

It's also very well-received due to the secure and accessible front doors with a ceiling that's tall enough to allow access to the enclosure without the tarantula darting out.

The inside of the enclosure needs to be as burrow-friendly as possible to keep this species healthy. There should be about 6 inches of moisture-retaining substrate layering the bottom of the enclosure that can be burrowed into and keep the humidity levels consistent.

In terms of decoration, it can be quite bare as these tarantulas don't require a lot. However, a few different rocks and fake plants can really bring the entire enclosure together. A
water dish and an appropriate hide are also necessary accessories.

Every tarantula requires an enclosure that features several different climate zones so that they can regulate their body heat. In the wild, Nhandu chromatus thrives in a climate that's quite consistently hot and humid, so that should be characteristic of the enclosure that you create.

To match the climate of Brazil, the enclosure should be kept right around 78°F.

This is close to room temperature for many people, so supplemental heating isn't needed. However, colder climates may require an external heat source. Gentle heat lamps are great for heating small areas, and space heaters can be used to warm up the entire room that the tarantula enclosure is kept in.

It should also be noted that humidity needs to be maintained year-round for all tarantulas including Nhandu chromatus. The recommended humidity levels for this species are between 65% and 75%, with 70% being right about perfect.

A hygrometer should be used to monitor the humidity levels across the enclosure. If you notice the humidity dropping at any point. Simply spray the substrate with a water bottle to rehydrate it.

The Brazilian Red and White Tarantula grows at an impressive rate into a tarantula that has potential to reach 8 inches. In order to achieve this growth, they need a diet that's nutritious and meets their dietary requirements.

Fortunately, this aggressive species is easy to feed, happily eating a mixture of crickets, roaches, and even locusts. You won't need to worry about them eating enough -- that's for sure.

​Spiderlings typically are fed small fruit flies until they reach about 1/2" in size, at which point they switch over to baby crickets. As they grow, the food that they're given can scale up in size with them.

Since tarantulas can't be overfed, it's always better to provide too much food than too little. 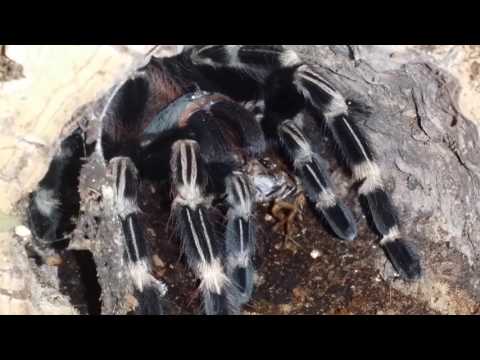 Captive-held tarantulas don't tend to experience many health problems at all. Kept away from the diseases and predators of the natural world, these tarantulas can really thrive and easily live to and beyond their expected lifespan.

It needs to be reiterated that these tarantulas require an enclosure that allows them to burrow. For many years, wild tarantulas of this species have been burrowing to protect themselves and to raise their young.

So, in order to ensure the health of yours, you need to make sure that they can readily burrow. If they can't burrow, they may exhibit strange or destructive behavior that should definitely be avoided.

Additionally, tarantulas sometimes run into problems when they are molting. This is important to know for Nhandu chromatus, which is a larger tarantula that will undergo several molts during their life.

If a molt ever happens to get stuck, you'll need to interfere and help your tarantula complete it safely. While this may seem daunting, there are many different guides that walk owners through how to do such a thing.

This tarantula species is not the easiest to care for and isn't talked about very frequently. While it is a very fascinating tarantula species, it's simply not very highly desired and thus sells for a relatively low amount of money.

So, if you're looking for a great under-the-radar tarantula, you can get this one for a shockingly low price.

Overall, for $50, a Brazilian Red and White Tarantula is one of the best tarantulas that you can buy. These feisty tarantulas have a very interesting personality with a subtle yet attractive appearance that is loved by thousands.

If you're looking for a great display tarantula, you don't need to look much further than this species.