Everybody is always on the lookout for an extremely exciting, unique, and fun tarantula to add to their collection. Theraphosa apophysis, also known as the Goliath Pinkfoot Tarantula, is definitely up there with some of the most well-received tarantulas. In fact, its uniqueness has placed it among some of the most expensive tarantulas in existence today!

So, if you're looking to bring home one of these incredible tarantulas, there are several things that you should know beforehand. This post will cover T. apophysis' quirks and features that make it such a great species (but maybe not a great one for you).

This tarantula species could be classified as a 'sleeper', as its appearance isn't extremely unique. In fact, it looks very similar to Theraphosa blondi and Theraphosa stirmi save a few subtle differences. This species features much more hair on its legs with a subtle reddish-pink hue throughout its body. They also have smaller bodies than those other two species, making up for it with their massive legs.

The "Pinkfoot" in their name comes from the fact that as slings, these tarantulas have pink-colored legs. However, this coloring quickly disappears as they age. This doesn't mean that the tarantula gets any less impressive, though. These guys are absolutely massive in size, which is why they're so well-liked.

This is a fast-growing species that reaches an impressive legspan in a short amount of time. You can generally expect your adult Theraphosa apophysis to reach about 10 inches in legspan. However, rare cases have seen this species grow beyond a foot! This is right in line with many other Birdeater tarantulas.

As a spiderling, their coloration is very bland, and their sizing is slightly larger than other slings.

The temperament of this tarantula species is one of the reasons why they're so fascinating to many different people. They're in a sort of purgatory between calm and slightly aggressive, making it challenging to label their difficulty. This doesn't stop thousands of people from enjoying them, though.

Theraphosa apophysis are new world tarantulas, which are tarantulas that are known for their calmer demeanor, flight-over-fight mentality, and lack of a bite as self-defense. In short, these tarantulas are generally seen as very laid-back and more suitable for inexperienced first-time owners.

While this species is certainly calm yet skittish, there are a few different traits that set it apart from many other new world tarantula species.

Most of the time, this species just lounges about their enclosure without many worries. They're very laid-back and will only cause problems when disturbed or annoyed in some way. This results in them taking on a defensive stance, hissing, and even flicking their urticating hairs at you.

It should be noted that this species of tarantula has the worst, most irritating urticating hairs out there. If you're stuck with these hairs, they have the potential to cause irritation for 24-48 hours.

Because of this, move very slowly around your T. apophysis during feeding or cleaning, and only handle them with gloves, long sleeves, and eye protection. Their enclosures are also covered in these hairs, and they can easily become airborne during routine maintenance of the cage.

One more characteristic to note is that Theraphosa is an opportunistic burrower, meaning that it has a strong desire to create burrows and stay within them. This means that this species will be out of sight for long periods of time, resulting in it not being a great display species.

Before taking home a Goliath Pinkfoot Tarantula, you need to have their enclosure set up and ready to go. This is especially important with this species due to their particularly irritating urticating hairs.

You don't want to have to access their enclosure very frequently, so you need to create an enclosure that requires very little maintenance and interference.

First of all, it should be noted where this species of tarantula is from -- Venezuela. It features a tropical climate along the coast and a temperate climate in the mountains. The average temperature is a mere 70°F, with the average humidity sitting right around 80%.

This climate is quite similar to the natural climate of other tarantula species, but the humidity is substantially higher. 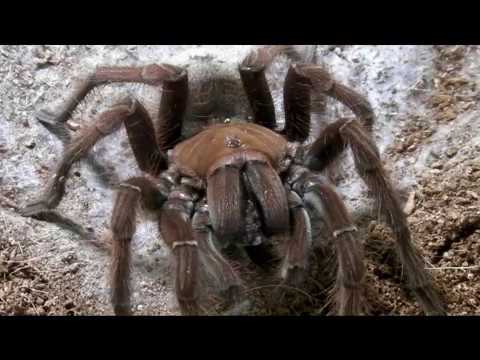 While Theraphosa apophysis have environmental requirements that need to be met, it's not a difficult task to meet them. First and foremost, these are terrestrial tarantulas that have a desire to burrow.

Because of this, their enclosure should have more of a focus on floor space than height to accommodate for their burrows and large leg span. Since they are relatively sedentary, they don't require extremely large enclosures.

For a fully-grown specimen, this Exo Terra 18"x18"x12" glass terrarium would provide them with plenty of floor space to burrow and walk around and create webs.

This particular enclosure is extremely fitting for Theraphosa apophysis because of its large, secure doors, solid construction, and suitable sizing. Some owners also opt to use a 20 gallon fish tank as an enclosure, and this works well. Just be sure to get a secure lid so that the tarantula can't climb out.

The inside of this terrarium needs to be extremely burrow-friendly. This is done by providing about 6 inches of moisture-retaining substrate at the bottom of the enclosure.

On top of the substrate you can add accessories such as a water bowl, a well-sized hide, rocks, sticks, and fake plants. Fortunately, tarantulas aren't very picky. As long as your Goliath Pinkfoot can burrow, it'll be happy.

Within a tarantula enclosure, there should be several different temperature zones to allow the tarantula to regulate its body temperature. Theraphosa apophysis experiences a relatively consistent climate in the wild, making it quite easy to replicate within their enclosure. To match this specific climate, the enclosure should be kept right around 78°F.

Most of the time, room temperature is more than acceptable. However, some colder climates require supplemental heating. You can either use a gentle heat lamp to warm the enclosure as needed, or use a space heater to warm the entire room that the enclosure is in.

It should also be noted that Venezuela is a very humid environment. The entire Theraphosa genus has a very low drought tolerance, with slings dehydrating very quickly.

So, it's recommended to keep a water bowl in the enclosure, in addition to some damp sphagnum moss on top of the substrate. However, don't make the enclosure swampy. Soggy and stagnant conditions aren't optimal by any means, and can actually cause many problems.

Goliath Pinkfoot Tarantulas absolutely live up to the 'Goliath' in their name. They start out as large spiderlings and grow into a very sizable tarantula, so their diet needs to be optimized accordingly. Despite this, they're still very easy to feed and don't require a lot of special attention in this sense.

The large spiderling babies eat 1/2 inch baby crickets, and this is increased as they reach adulthood. As adults, T. Apophysis tend to eat about 3 adult dubia roaches or 15 adult crickets weekly. This is a ravenous species that has no problem eating the food within their enclosure. Due to this, you'll commonly see specimens outside of mating season with very large abdomens. 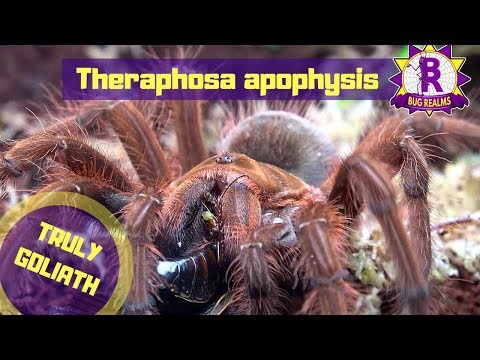 There are almost no health issues that captive-held tarantulas can run into. Without the dangers of the outside world, there are not many factors that can negatively impact a tarantula. Dehydration and parasites/mites do affect some tarantulas, but those ailments are very easy and fast to cure.

There are a couple of things that you should know about this species of tarantula. First of all, they absolutely need to burrow -- they have a biological need to do so. If they can't create an adequate burrow, they may exhibit signs of stress that should definitely be avoided.

Additionally, be very careful with humidity within their enclosure. 80% humidity is quite high, and it will take a little bit of maintenance to make sure that the enclosure doesn't become to swampy. Use a hygrometer to monitor humidity levels and adjust accordingly. Keep an eye out for mold or overly-moist substrate.

Additionally, there's a possibility that your tarantula will run into a problem with its molt. While most molts go off without a hitch, some of them happen to get stuck. If this happens, it's essential that you remove the stuck molt as soon as possible. While this is dangerous, there are several guides online that detail how to deal with this problem.

There are a few different online marketplaces that are currently selling this tarantula species. While prices vary greatly, you can expect to pay around $150 - $200 for a healthy 2" sling. This is extremely expensive compared to other tarantula species, making it unobtainable for many people.

Despite the massive price tag on this tarantula, it's a species that really can't be beat. Its interesting personality, subtle styling, and massive size make it a great addition to any collection. The overall rarity of this tarantula also contributes to its splendor.

So, if you're looking to break the bank a little and splurge on a unique tarantula, look no further than the Goliath Pinkfoot Tarantula.