Ferrets are long, fuzzy, curious pets that most people are aware of. However, the vast majority of people, even ferret owners themselves, may only know of the domestic ferret that's most commonly kept as a pet.

Sure, there are many types of these ferrets in terms of color and pattern, but they're ultimately the same breed. Angora ferrets are the lesser-known ferret breed that came about by accident and have quite an interesting history attached to them.

So, if you're curious about Angora ferrets or are looking to take one home in the future, we'll give you everything that you need to know about these extra fluffy ferrets.

Angora ferrets came into existence through an accident that proved to be beneficial in the short and long run. Quite a few years ago, a Swedish ferret breeder discovered a genetic mutation in some of his ferrets.

This mutation resulted in ferrets with much longer hair than standard ferrets, especially around their rump. The Swedish breeder then sold his stock of these long-haired ferrets to a Norwegian fur farm that went on to breed these ferrets and create the Angora ferret that we know today.

When Angora ferrets first came around, they weren't bred with health in mind. Originally, they were simply tools used to create more fur per animal, so that fur farm didn't breed them in the best way. However, once the public became interested in this breed of ferret and breeders started caring for their own lines, they started to become much healthier in some areas.

Being that Angora ferrets originated in Europe, you'll find the most healthy specimens in that area, too. Some breeders in Europe have Angora lines that go back a dozen or more generations. They also cross-breed their Angoras with standard ferrets or half-angoras to promote genetic diversity.

This has resulted in ferrets that are properly cared for and have their genetic health kept in check. Angora ferrets are also available from American breeders, but their health may be spotty in some aspects.

​The Angora ferret's appearance is where they really differ from standard ferrets. To begin with, the Angora has a very unique coat. Both the undercoat and the guard hairs are the same length, normally growing between 2 and 5 inches long. This results in a very soft and fluffy-looking ferret that makes it very desirable for a lot of ferret owners.

In addition to the long fur, Angora ferrets have characteristically strange noses. Their nose features an extra fold that ranges from subtle to extremely obvious and can be covered by their long fur. This is one of the best ways to quickly differentiate a long-haired ferret from an Angora ferret.

Other than the long fur and cleft nose, Angora ferrets are quite similar to standard ferrets in other aspects. For example, Angora ferrets can come in a wide variety of different colors and patterns (although some are more rare than others). Additionally, they grow to be about the same size as standard ferrets, reaching over a foot long and weighing around 3 pounds on average.

Despite the fact that Angora ferrets are a different breed than standard ferrets, they behave almost exactly the same. If you supply your Angora ferret with all of the supplies that it needs, then it should remain healthy, happy, and loving towards you.

Of course every ferret is different, so some Angoras will behave slightly differently than others. There are also a few things to note about Angoras and their genetic makeup.

First thing's first, though, and that's the fact that Angora ferrets are still ferrets. Ferrets are creatures that are extremely playful and inquisitive and will quickly form a close bond with you.

These characteristics combine with their tenancy to be mischievous and adventurous, running around a house, climbing onto counters, and stealing knick knacks to hide. When your ferret isn't sleeping, they're definitely exploring some corner of your house or jumping on your feet to get you to play with them.

One thing about Angora ferrets is that their genetics are a bit unique. Regular domesticated ferrets have been kept to a standard for quite a long period of time. This has resulted in very tame and docile ferrets that make for great pets.

Angora ferrets, on the other hand, have sometimes been crossed with polecat strains or hardier ferrets in an effort to increase their genetic diversity and overall health. This has resulted in some Angoras being a bit more active and "nippy" during playtime, but nothing aggressive.

Other than that slight difference, Angora ferrets make for fantastic pets. They live between 6 and 10 years on average, and they're capable of providing so much fun and entertainment during that time. ​Angora ferrets are just as easy to care for as standard ferrets with one or two extra caveats. They need a safe and comfortable cage, a well-rounded and nutritious diet, and good consistent health care and grooming. Combining all of these things will result in a very happy and healthy Angora ferret that's free from any ​problems.

​The diet of an Angora ferret is virtually the same as a standard ferret. Ferrets are obligate carnivores, meaning that they have to eat meat and only meat to get all of their essential nutrients. Ferrets absolutely can't eat plant matter as their bodies simply aren't designed to process and digest it properly.

This is what ferrets have been eating for thousands of years. Over this time span, their bodies have become fine-tuned for dealing with this exact diet. Therefore, your Angora ferret's diet will need to be made up of a food that has a big focus on pure meat as an ingredient. What exactly does the best ferret food have nutrition-wise?

​This healthy pellet food should be supplied 24/7 as ferrets have short digestive tracts that require them to constantly eat. On top of a great pellet food, healthy treats or supplements can be used to round out a ferret's diet and keep things a lot more interesting for them. 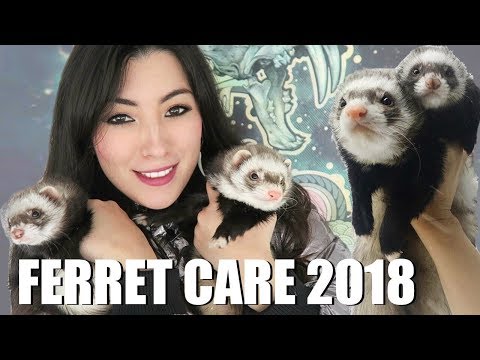 ​Since Angora ferrets such adventurous and active creatures, it's important that you supply them with a cage that's able to contain them in a comfortable way. Fortunately, there are many different ferret cages that were designed with the specific needs of ferrets in mind. There are also quite a few terrible cages, though. So what exactly does an Angora ferret need in a cage?

To begin with, bigger is always better when it comes to a ferret's cage. Your Angora will need plenty of room to play, run, climb, poop, and sleep without feeling cramped. Larger cages are easier to accessorize, they're easier to clean, and they provide plenty of room for ferrets to exercise.

You should also note that ferrets do really well in groups, so you'll need a cage that can hold two or more ferrets. A 3 foot by 3 foot cage with multiple floors is generally a safe bet for several ferrets, but you can always go bigger.

Not only should the cage be large, but it should also have great accessibility to make cleaning easier, safe materials that won't break off or cut a ferret, and solid floors for a ferret to walk on. A proper cage for an Angora ferret will make it noticeably happier and healthier, so it's recommended that you make the extra investment for a better cage. Overall, ferrets are quite low-maintenance and easy to care for -- and Angoras are no exception. First of all, ferrets sleep for more than half of the day, requiring no attention during this time.

When they're awake, ferrets do require a good amount of free play time, but their curious side keeps them entertained even if you're not actively playing with them.

This is especially true for households of 2+ ferrets that can entertain each other. Health-wise, ferrets are fairly easy, too. A proper diet and consistent playing will keep them at a healthy weight and keep most diseases at bay.

Ferrets also don't need to be bathed frequently, so a short bath every other month or so will do wonders. Angola ferrets will require a bit more upkeep with their long hair, though, so make sure that they're getting washed enough. Additionally, regular brushing is essential with these ferrets to help prevent knots and to remove any excess hair.

Now, ferrets are susceptible to random health issues like lymphoma, adrenal disease, and insulinoma. Some sources state that Angora ferrets are especially susceptible to these issues due to their poor genetic past, but modern Angoras bred by experienced ferret breeders are very healthy.

So, it's safe to say that as long as your Angora comes from a good breeder with a good genetic history, your ferret should be very healthy.

​If you're ready to own an Angora ferret of your own, it's not too difficult of a process! However, it does take a healthy amount of research. ​You need to find a breeder that has a long history of raising healthy Angora ferrets with a great genetic past. As with all animals, Angora ferrets can come from some neglectful breeders that will have a higher chance of developing some problems down the road.

One thing to note is that European ferrets tend to be quite healthy compared to American ferrets. This is due to the fact that European ferrets are often raised outside, fed a healthier diet, and bred in a better way. As some Angoras can be fairly inbred, proper care is absolutely essential. So, this may result in Angora ferrets being healthier in Europe.

A route that a lot of owners end up taking is purchasing a semi-Angora, or a mixture between an Angora and a standard ferret. This is done because these ferrets look very similar to a pure Angora, but they're more genetically diverse and considered to be significantly healthier.

It isn't guaranteed that these mixes will be healthier, but they will avoid the potential problems that come from inbreeding.

Therefore, our advice is to do your research. Find breeders within your country that have a history of breeding Angora ferrets and make their pedigree known. There are plenty of very caring and dedicated people breeding these ferrets, and you just have to seek them out.