When it comes to the average person, the thought of a spider with a foot-long legspan is bone-chilling. They can barely stand the sight of normal house spiders, let alone massive hairy tarantula specimens. However, tarantula enthusiasts are absolutely drawn to the majesty that is a goliath tarantula. Such massive tarantulas can easily become a prized staple of any respectable collection. ​Theraphosa stirmi​ is one of those incredible species.​​

This post will highlight all of the important information regarding this unique tarantula. It will go over the unique appearance and specific care instructions, in addition to a history of how this tarantula came to be so popular!

The most obvious characteristic that people first notice about this tarantula species is its intimidating appearance. Virtually all tarantulas in the Theraphosa genus are massive, and T. stirmi is no different. Fully grown adult specimens reach about 10 to 11 inches in legspan, making them an absolute unit of a tarantula.

On top of the sheer heavy-bodied size of this tarantula, its coloration is subtle yet attractive. Their wide carapace, thick abdomen, and long legs are all varying shades of brown, but can take on a burgundy hue after going through a molt. Not the most exciting colors, but definitely still nice to look at.

Even as babies Theraphosa stirmi are still very impressive. New spiderlings can exceed .5 inches in legspan, and they reach maturity quicker than most other species. As slings, they have a lighter appearance that darkens as they go through their first few molts. It's important to keep in mind that males only live about 4 years, while some females have lived up to 20 years! Not only does this tarantula look awesome, but it's also got a great personality that many people can't get enough of! It's definitely a tarantula that uses its size to its advantage, but has a few quirks that make it quite interesting to own. This is common among the bird eating species, but especially so with Theraphosa stirmi.

In stark contrast to their large, menacing appearance, Theraphosa stirmi is known as a relatively docile and skittish species. They can absolutely pack a punch if needed with their inch-long fangs, but they're much more willing and able to flick their extremely irritating urticating hairs when they feel a little threatened. Because of this, it's not recommended that you handle this species, and you need to be very careful interacting with them.

Another thing to note about this species is that it doesn't tend to spend a lot of time outside of its burrow. Like many bird eating species, it prefers to stay at the entrance to its burrow and come out when it detects prey close by. So, if you're looking for a tarantula that will stay on display all the time, this isn't the best species for you. However, it's certainly a treat when it comes out to hunt or explore.

Overall, ​T. stirmi​ isn't an overly aggressive tarantula, but it also isn't extremely docile. This makes it fairly middle of the road in terms of care, so beginner owners may need to take some caution when owning one of these.

If you want to take home a Theraphosa stirmi for yourself, you need to make sure that all of their environmental needs are being met through their enclosure. Also, due to the fact that these tarantulas are a bit skittish, you'll want to create an enclosure that doesn't require you to access it very frequently.

Let's analyze where this tarantula is originally from to better understand what they need environmentally. The Burgundy Goliath Birdeater hails from Guyana, which is a tropical region that doesn't experience a lot of variance in its temperature. Despite being a tropical area, the climate is actually quite mild. This results in an optimal temperature for this species sitting around 80°F with about 70-80% humidity. 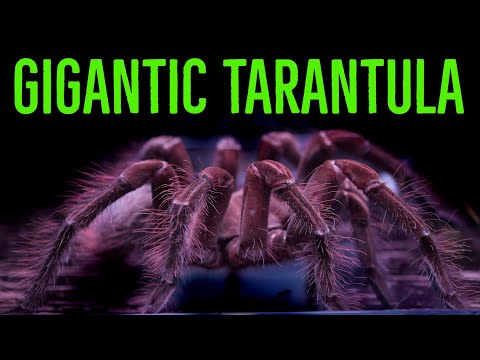 While Theraphosa stirmi has special requirements for its enclosure, it's not hard to provide it with an optimal living space. To begin with, these are terrestrial tarantulas that love to create deep burrows. Because of this, the enclosure needs to be quite long and wide with good depth to it to allow for burrowing. Enclosures that are too small (which isn't hard to have with these behemoths) can yield quite a few problems.

Because these tarantulas are so large, and because of the fact that large terrariums can easily run $150+, it's best to DIY an enclosure. Using this Ziploc 60-Quart storage box with air holes drilled into the top and side is a great way to house T. stirmi. It's incredibly cheap, but sturdy, and the lid locks on securely. There's even a gasket under the lid to help keep the enclosure more insulated -- great for humidity!

The inside of the enclosure needs to be crafted especially for this tarantula. This includes layering the bottom of the container with about 6 inches of substrate that's able to retain moisture and can be burrowed into. Additionally, a small water bowl is a must, some sphagnum moss can be sprinkled around to help with humidity, and an accessory or two like rocks, sticks, or small plants can really tie everything together. A hide is also necessary, as it will help this skittish species feel more comfortable.

It's no surprise that such a large tarantula is going to have a ravenous appetite that requires it to eat quite a bit. In order to grow into their massive legspan, they need to have a diet that satisfies their nutritional needs. Fortunately, because these tarantulas are such good eaters, feeding them is never a hassle. They'll seem to teleport from almost a foot away to pounce on their food and pull it down into their burrow.

Because ​Theraphosa stirmi​ is such a large spiderling, its diet doesn't vary too greatly throughout its life. Spiderlings can be fed 1/2" baby crickets about 2-3 times per week, and they attack those crickets with a surprising vengeance. Adults can eat substantially more, eating about 3 adult Dubia roaches or 10-15 adult crickets weekly.

Fear of overfeeding doesn't exist with this species. In fact, you'll want to put effort into ensuring that they have access to large prey that will sustain them and give them a good challenge to hunt. When you know that the tarantula is nearing its molt, you can look into feeding them larger prey such as Madagascar hissing cockroaches. 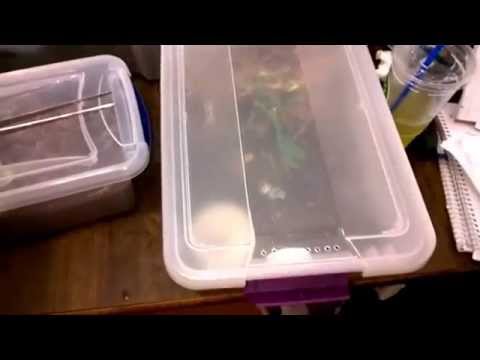 Captive-held tarantulas usually don't run into a lot of problems when it comes to their health. As long as you provide your Theraphosa stirmi with a sizable enclosure and a complete diet, there aren't many things stopping them for living out their entire lives. Essentially the only issues that captive tarantulas run into are dehydration and mites/parasites, but both of those are easily avoided and dealt with.

There are two important points to note when it comes to this species. First of all, its size needs to be accommodated. A Burgundy Goliath Bird Eater's enclosure needs to be plenty big enough for it to roam around, hunt, and create a sizable burrow. Enclosures that are too small can have negative effects on a tarantula.

Additionally, for the sake of your health and your T. stirmi's health, you should never handle your tarantula. While a lot of tarantulas of this species are quite calm, they're still wild animals and can act unpredictably. Just one hair flick or bite can cause you to react and potentially harm your tarantula in the process. Be very cautious when doing anything around this tarantula.

​​As stated previously, ​T. stirmi​ is a great alternative to the once-popular ​​T. blondi​. Due to its similar appearance and mannerisms but much easier and more forgiving husbandry, ​​​​​T. stirmi​ has gained a good amount of popularity since its introduction, thus fetching a higher price than other tarantulas. However, the pricing certainly isn't bad for such an incredible species.​​​​​​​​​

Several breeders and online marketplaces are selling Theraphosa stirmi for a range of different prices. Spiderlings go for less money, and can typically be found for between $50 and $100. Sexed, mature adults go for substantially more than that, though. Males can go for around $100-$150, while some females exceed $200. All of these prices typically include a safe arrival and good health guarantee, but it's still a substantial amount of money.

Despite the higher price tag, for $100 this is one of the best tarantulas that you can purchase. The sheer size of this tarantula combined with its great personality and interesting mannerisms make it a must-have display tarantula for any collector. If you can accommodate their needs, they'll provide you with years of entertainment.