​The world of tarantula ownership is quite interesting. Many first time tarantula owners tend to gravitate towards more beginner-friendly species that are slower and can be handled, such as Pink Toes or Rose Hairs. Then, they move onto more advanced tarantulas, such as Chilobrachys or OBTs. In doing this, these owners tend to miss out on some incredible lesser-known tarantula species, including ​Tapinauchenius gigas.

This is a species of tarantula that has a lot going for it in terms of being a great pet. It's certainly not for beginners that want to handle their tarantulas, but it's still a fascinating species. Their appearance and temperament are unique and exciting and don't bring a hefty price tag with them.

​Tapinauchenius gigas ​has an appearance that's not very similar to many other species. It's easily classified by its bright orange coloring on its abdomen and legs. The carapace is a lighter colored orange with faint hints of gray and green to really make it a beautiful species all around.

In addition to coloring, the overall style of this species is quite beautiful. Most notably is the thick, fluffy hair that they develop on their legs. ​This is a new world tarantula, but they don't have urticating hairs -- their fluffiness is just for show. The unique appearance of these tarantulas makes them highly desirable to true enthusiasts that know about them.

As far as sizing goes, Tapinauchenius gigas are quite average-sized tarantulas. Adults typically grow to have a legspan between 5 and 6 inches, reaching this legspan within an average time frame. Slings start small and unremarkable in appearance, but quickly grow out of that stage.

So, while this tarantula doesn't have a lot of crazy quirks and features, it's all-around still a very impressive species. This species has a temperament that's right in the no man's land area of slightly calm but also slightly skittish. While they aren't necessarily beginner-friendly, they are a lot easier to care for and work around than other species. Overall, though, they bring a good amount to the table that other tarantula species simply lack.

Tapinauchenius gigas are new world tarantulas -- tarantulas that are known for their more calm demeanor and choose "flight" over "fight". This definitely stands true for this species, as aggressiveness is not something that they're known for.

Biting is extremely rare, but it can still happen, so take caution if you're ever in close contact. Overall, though, it's a tarantula species that is great for owners that have a little bit of prior tarantula experience.

To begin with, these tarantulas have a personality that's more nervous than aggressive. Tarantula keepers will frequently state that this is one of the quickest species that they've ever come across -- ​they're always seen running up and down their enclosure.

So, while they aren't particularly aggressive, their speed makes them very difficult to handle at all. This doesn't take away from the fact that they're fascinating to observe within their enclosure, though.

​Unlike many new world tarantulas, this species does spend a good amount of time out in the open in their enclosure. They are arboreal, so they're very used to hiding within the bark of trees throughout the day. However, they'll gladly roam around their enclosure once they've become comfortable with it (and they expect food from you). 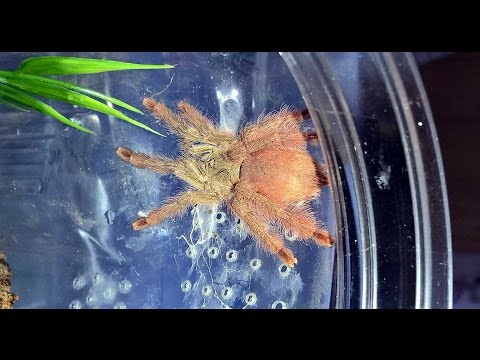 ​​If you want to take home a Tapinauchenius gigas for yourself, especially if you plan on breeding them, ​you need to be positive that you'll be able to meet their environmental needs.​​​​​​ Also, ​due to the fact that these are quite speedy tarantulas that can get a bit nervous, you'll want to create an enclosure that doesn't need to be interacted with frequently.

First of all, the natural environment of this species should be noted. It's endemic to French Guiana, which is a region on the north Atlantic coast of South America. This region has a tropical rainforest climate, boasting extensive heat and humidity year-round.

It's also home to many different ecosystems, many of which are biodiversity hotspots. Tapinauchenius gigas live in and rarely leave the tall trees of this region, so their enclosure should mimic what they've grown used to.

While Tapinauchenius gigas have special environmental requirements, they aren't very difficult to meet. To begin with, these are arboreal tarantulas, meaning that they spend most of their time in the trees.

Because of this, their enclosure should be relatively tall with plenty of space for them to vertically climb. Fortunately, these tarantulas don't grow to be huge, so the enclosure doesn't need to be excessively tall.

For a single tarantula, an enclosure that's similar to this Zilla 12"x12"x18" terrarium would provide them with plenty of space to climb. This particular enclosure is fantastic for many reasons. In addition to the fact that it looks very clean and attractive, it's also made of very high-quality materials.

The solid door is placed at an optimal height to allow for adequate substrate placement at the bottom and to keep Tapinauchenius gigas contained when accessing the enclosure.

Inside the terrarium, you should try and model it close to how an Orange Tree Spider's natural environment looks. ​This includes layering the bottom with about an inch of substrate and then providing a​ large piece of cork bark ​to mimic a tree trunk and allow for climbing. Fake plants can also be used to take the enclosure to another level. Silk leaf vines are a favorite among tarantula owners.

Remember that tarantulas don't care how their enclosure looks as long as their basic needs are being met. So, as long as there's substrate, water, and things to climb, you're set to either stop there or carry on until you've constructed a lifelike replica of a French Guiana forest.

In the wild, Tapinauchenius gigas is subjected to an extremely warm and humid climate. Since this species is used to the climate of a French Guiana forest, you should keep your tarantula's enclosure at around 78°F. Room temperature is suitable sometimes, but colder houses might need supplemental heating.

Two options for heating exist. Gentle heat lamps can be turned on and off as needed to provide warmth, or space heaters can be used to heat the entire room that the tarantula enclosure is in.

​While no tarantulas enjoy soaking wet environments, the Orange Tree Spider does prefer a bit more humidity than other species. ​About 70% humidity is recommended, and this is easy to monitor by using a simple hygrometer. ​When the humidity starts to drop too low, you can simply spray the substrate with water to rehydrate it. Don't let it get too damp, though, or you'll run the risk of mold.

​The ​Orange Tree Spider grows into a stunning tarantula in quite a short period of time. ​However, in order to make this transformation, they need to have all of their nutritional needs met. Fortunately this is an easy species to feed, gladly eating a typical tarantula diet of crickets, roaches, and locusts. It's fascinating watching this species leave its treetop perch to hunt for food.

​You'll want to​ keep uneaten insects from roaming around the enclosure freely. Not only can they annoy your slightly nervous ​​Tapinauchenius gigas​, but they may also die in an inaccessible place. ​​​So, it's generally a good idea to be a bit more conservative in terms of feeding with this species. Captively-held tarantulas don't tend to come with many health problems. If you supply your Tapinauchenius gigas with an appropriate enclosure and a diet that's interesting and nutritious, they should stay quite healthy.There are essentially only two main issues that captive tarantulas run into, and those are dehydration and parasites/mites. Both of these issues can be quickly dealt with if you ever run into them.

If an enclosure isn't kept humid enough, especially if it's a tarantula like the Orange Tree Spider, then they can become dehydrated. This results in lethargic behavior and can cause death if it isn't promptly dealt with.

Fortunately, it's easy to re-hydrate tarantulas by placing them on a wet paper towel and keeping the environment around them humid. To prevent further dehydration, just make sure to consistently spray their substrate with water.

Additionally, some tarantulas may experience a problem with their molt. ​While it is rare, some molts can become stuck part-way through and require outside assistance in their removal. ​If your Tapinauchenius gigas ​ever experiences this, you'll need to perform the dangerous but necessary task of helping them complete their molt​​​. Fortunately, there are quite a few guides online that tell owners how to best go about helping to remove their tarantula's exoskeleton.

One more specific thing to note about this species is that it absolutely needs space to climb. Since it's an arboreal species, it's evolved to function effectively off of the ground and in trees. If they aren't provided with an arboreal environment, they may exhibit strange and sometimes destructive behavior.

​While this tarantula species seems like it would make a great addition to the collection of many, the truth is that it's just not popular! This relatively shy yet beautiful and graceful tarantula is unknown by many, so there isn't much demand for it in the market. ​Because of this, you should be able to purchase one of these tarantulas for yourself with very little initial investment.

There are several online breeders and marketplaces selling Orange Tree Spiders for a surprisingly low price. You can typically find a spiderling for sale for around $30, and this usually includes a good health and safe arrival guarantee.

More mature specimens may fetch a bit more, but there aren't a lot being sold for over $50. For slightly experienced keepers, this price can't be beat for the great value you're getting with this species.

Overall, for $30, ​Tapinauchenius gigas is one of the best tarantulas that you can buy. ​These obscure tarantulas have a wonderful appearance paired with a personality that's immediately charming and quite fascinating to observe. They aren't very nice to handle, and they're not the ​most​ unique in terms of looks, but they're all-around a great addition to any collection.​​​