Bringing home a new tarantula is a very exciting time. There are so many different kinds of tarantulas with hundreds of different personalities and physical traits that will bring you tons of entertainment.

However, no matter what kind of tarantula you’re bringing home, one thing remains true — you need to provide them with the best tarantula enclosure possible. A well-built enclosure will help your tarantula feel more comfortable and allow them to live in a way that they’re used to.

There are several things to consider when building an enclosure for your new pet tarantula. This guide will help you to understand the needs of your individual tarantula and let you know exactly what they need in order to thrive. 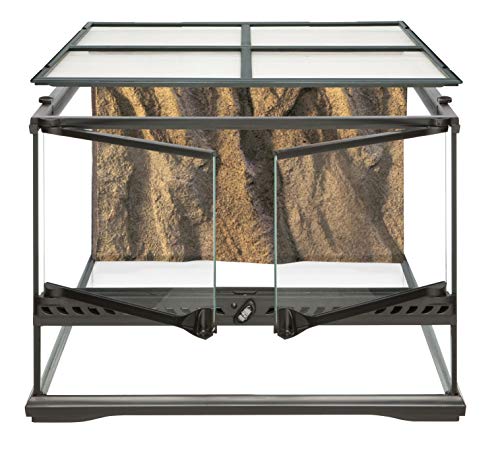 Exo Terra 18
A great terrarium for burrowing species of tarantulas. This 18
View on Amazon 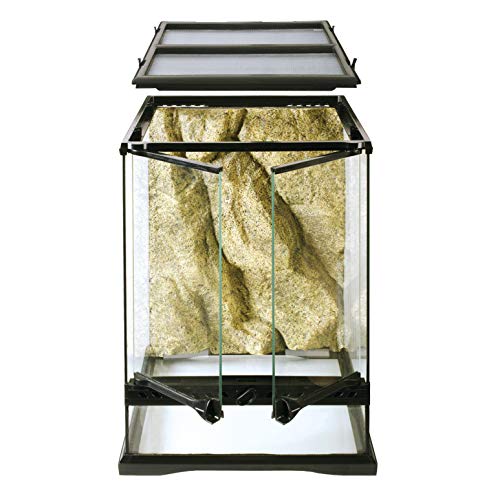 Exo Terra 12
This terrarium has all of the same features as the previous one, but it's optimal for arboreal species. This enclosure measures 12
View on Amazon

If you watch video content about tarantulas or read several different tarantula blogs, you may note that people keep their tarantulas in a wide variety of different enclosures. You’ll see tarantulas being kept in containers ranging from small cups (for spiderlings) to large aquariums.

While there are definitely some enclosures that are inappropriate for tarantulas, most are more than acceptable.

Tarantulas are wild animals with millions of years of evolution behind them. During this time, their bodies have become fine-tuned for surviving and thriving in the environments that they live in.

Due to this, a tarantula can’t be thrown in an empty enclosure and expected to survive. Instead, their enclosure should be built in a way that resembles a tarantula’s natural environment.

​The enclosure doesn’t need to be perfect, though. There are many different ways that you can design your tarantula’s enclosure to keep them happy and healthy. So, in short, tarantulas do need special enclosures, but there’s a good amount of freedom with what those enclosures should look like.

As stated previously, tarantulas have special environmental needs that have developed over millions of years. Their bodies and behaviors are designed for those specific environmental factors, so their enclosure needs to accurately represent the world that they’re used to.

Fortunately, it’s quite easy to achieve this.

Tarantulas can be classified into two groups when it comes to their enclosure setup, and those are arboreal and terrestrial tarantulas. Arboreal tarantulas spend a lot of time up in trees and don’t stay on the ground too much.

Alternately, terrestrial tarantulas rarely climb off of the ground, opting instead to create burrows that they stay in most of the time.

Because of these differences, you need to know whether your tarantula is an arboreal or terrestrial species in order to create the perfect tarantula enclosure.

On top of the general structure of their enclosure, they also have needs that are specific to each individual species. For instance, each species is native to one or several regions and thus is used to a certain climate.

Therefore, humidity and temperature are both factors that need to be considered and properly maintained.

While all tarantula species are different, there is quite a bit of overlap between species in terms of their environmental needs. As long as terrestrial tarantulas are able to burrow and arboreal tarantulas can climb and create webs, most of their needs are being met.

The smaller factors all come together to make the perfect tarantula enclosure, though.

When you’re creating your tarantula’s enclosure, you have quite a bit of creative freedom. Tarantulas don’t care about aesthetics — they just care about function.

So, as long as the enclosure has all of the features that a tarantula needs, you can make it look as realistic or as sterile as you want. Realistic-looking enclosures are easily a crowd favorite, though.

Once you’ve picked out the correct enclosure, you’ll be able to fill it with accessories and supplies.

Several inches of substrate should be present in a terrestrial tarantula’s enclosure, while only about an inch is needed in an arboreal enclosure. Many owners opt to dig out a burrow for their tarantula before-hand and reinforce it to help it last longer.

In addition to substrate, rocks and fake plants help to make the enclosure look much more realistic, give the tarantula more places to hide, and provide anchor points for webbing. Enclosures don’t need many of these, but a couple will take it to the next level.

A water dish and a sizable tarantula hide are also essential for every tarantula species.

Once substrate and a few accessories are added, that’s about all that a tarantula needs! There are other things that you can add to take it above and beyond such as a backdrop, but it isn’t necessary if you’re on a budget.

​What Defines The Best Tarantula Enclosures?

Since tarantulas are more of an observable pet than an interactive pet, they’ll spend almost all of their time in their enclosure with very little interaction. So, you’ll want a high-quality enclosure that doesn’t need to be tweaked constantly.

Below are some of the most important characteristics of the best tarantula enclosures.

​What Is The Best Tarantula Enclosure?

With all of the different enclosures available on the market today, it may be stressful trying to find the perfect enclosure for your tarantula.

It can be quite difficult to take into account size, quality, accessibility, and price if you’re not sure what you’re looking for. Fortunately, there are some enclosures available that perfectly meet the needs of tarantulas.

Below are our two picks for the best tarantula enclosures — one for terrestrial species and the other for arboreal species.​​​

Our Top Pick For Terrestrials

Exo Terra 18
A great terrarium for burrowing species of tarantulas. This 18
View on Amazon

Terrestrial tarantulas need an enclosure that’s spacious enough for them to adequately burrow into and explore. Fortunately, this Exo Terra enclosure is the perfect size for most terrestrials. It boasts 144 square inches of floor space with room for several inches of substrate to be placed underneath door level. It also features a waterproof base, raised base to help with heat distribution, and even a decorative textured backdrop.

The dual doors are well-constructed and allow for great accessibility within the enclosure for feeding and cleaning. There is also a full screen top that allows for excellent lighting and ventilation and is built to be very secure. Overall, this enclosure is built to contain a wide variety of terrestrial tarantulas in style.

Most tarantula owners are very happy with this enclosure. It’s commonly stated that this is an exceptionally secure enclosure that perfectly accommodates the needs of terrestrial tarantulas. Owners love how much space that their tarantulas have and how deep their burrows can get.

Additionally, the height of the enclosure is perfect to where it’s not dangerous if a non-arboreal tarantula were to climb up the side. The great accessibility and nice-looking backdrop round out the enclosure for owners.

There are some minor complaints when it comes to this enclosure. Most prominently is the fact that the locking mechanism on the door is slightly cheap. Owners don’t have a problem with it breaking, but it can be difficult to operate and lock it properly. Additionally, crickets or small tarantulas may be able to get behind the backdrop, requiring it to be taken out of the cage (which is easily done).

Our Top Pick For Arboreals

Exo Terra 12
This terrarium has all of the same features as the previous one, but it's optimal for arboreal species. This enclosure measures 12
View on Amazon

This enclosure isn’t extremely different from the previously mentioned enclosure. The only difference with this particular enclosure is the fact that it’s 18″ tall instead of 12″. The 6 extra inches gained from this enclosure can be used to make a great environment for your arboreal tarantula, though.

Featuring the same backdrop as the other enclosure, it allows you to build a more vertical setup within the enclosure. The textures allow for good anchor points for webbing, and fake plants can be placed within the enclosure to give many surfaces to climb on. The bottom features several inches of space for placing substrate, moss, rocks, and more plants.

Owners that purchased this enclosure for their arboreal tarantulas are also very pleased with their decision. The height allows for a lot of customization, resulting in some very creative enclosures being created. The front door makes it easy to access the enclosure without fear of a quick tarantula darting out. Quality-wise, it’s very spot-on and keeps tarantulas contained without any worries at all.

The same problems that exist with the other enclosure also exist with this one. The door locks are fairly cheap and need to be used gently to make sure that they don’t break. Additionally, the backdrop has a bit of space that may need to be filled in if you don’t want your tarantula or crickets getting behind it.​

​​Bringing home a new tarantula is such an exciting time. With how beautiful and fascinating these creatures are, it makes sense that you’d want to provide them with the highest-quality enclosure possible. This ensures that they’re as healthy and happy as they can be — potentially resulting in them living for quite a long time.​​​

​Not only are these enclosures made by a very reputable company, but they’re constructed very well, too. They are made from high-quality materials and have a design that’s perfect for both terrestrial and arboreal tarantulas. You’ll be able to create the perfect enclosure for your tarantula within the walls of either of these enclosures!