​If you've spent any amount of time watching videos or browsing pictures relating to tarantulas, you've seen a keeper handling their tarantula in some way. Tarantula handling is a very common activity that a lot of keepers take part in, so it's become very normal within the hobby. However, this doesn't make it safe or okay for you to do.

While there are many guides available online on how to handle a tarantula, we here at Beyond The Treat simply can't recommend that you ever handle your tarantula. The dangers of doing so are too prominent, and it may result in the harming or even death of your pet tarantula.

Below, we're going to highlight the reasons behind why handling a tarantula is not safe for you or the tarantula. We'll also lay out what the alternative to handling is, and how to go about safely moving your tarantula around if needed.

​Why You Shouldn't Handle A Tarantula

​There are many different reasons why you should never handle your tarantula. As the owner, you need to practice good animal husbandry -- that is your responsibility as the owner and keeper of a living animal. While handling your tarantula looks fun and exciting, it simply poses too much of a risk to the tarantula to be worth attempting.

​Due to the combination of reasons why handling isn't safe to do, there isn't anything that you can do to make it safe. When you're dealing with a living creature, especially one with a lot of personality traits that were developed in the wild, you can never be confident with how they're going to react to different stimuli.

​Tarantulas Don't Need To Be Handled

​First and foremost, the point needs to be made that tarantulas simply don't need to be handled in any scenario or in any manner. You may be tempted to handle your tarantula to become more respected within the hobby and to develop a closer bond and better understanding of your animal. However, experienced keepers will tell you that it's simply not necessary to handle your tarantula to get these benefits.

In fact, many keepers state that they would attempt to handle their tarantulas when they were new to the hobby, but quickly stopped once they became more knowledgeable and experienced.

If you're ever asked by someone why you don't handle your tarantulas, use it as an opportunity to educate them. Explain that you like to treat your animals with respect and observe their beauty without directly touching them. You could even elaborate on the dangers of handling and how it could pose a hazard to a tarantula's health. Don't ever feel pressured to handle your tarantula.

Additionally, some keepers may think that they ​have ​to handle their tarantula ​​​during, for example, a rehousing or a cleaning. Fortunately, this isn't the case. Later in this post I will guide you through moving and manipulating a tarantula without ever actually needing to handle it. ​It helps to view tarantulas as more of a robot that responds in a predetermined way to certain stimuli. While you may hear people describe tarantulas as smart creatures, I and many experienced keepers will have to oppose this idea. ​I've heard some owners state that, over time, your tarantula will grow used to you handling it and become more tame and trained for interaction. This simply isn't the case.

Sure, tarantulas will change their behavior in some ways if it means that it benefits them. For example, a tarantula may come out of its burrow when you access its enclosure because it knows that there's about to be food. However, saying that a tarantula is "learning" is a bit of a stretch.

Handling your tarantula is simply a roll of the dice with you hoping that conditions are right for them to act docile and not attack. These spiders have developed very specialized personalities and abilities over millions of years of evolution -- abilities that can't be overridden with just a few sessions of handling. If you make a move to handle your tarantula, it will likely see it as a predator moving in for an attack and will react accordingly.

Anyone that's owned a tarantula will tell you that tapping on their enclosure or breathing on them will sometimes cause them to react as if their life is in danger. This could happen the next time that you attempt to handle them.

So, you may have a particularly docile species of tarantula, and you may have handled it several times already, but know that that genetic programming is still very prominent and active. Sure, a tarantula can become mostly tolerant of handling, but something can still set them off.

​Tarantulas Are Unpredictable (And So Are You)

​It's very easy to attribute a human-like personality to your tarantula -- especially when they're big, furry, and frankly adorable. However, you need to remember that tarantulas are wild animals that are largely unpredictable in their actions. They are still wild animals without the ability for very complex thought. This may make them react in ways that are entirely unexpected to us.

Tarantulas are constantly changing their personalities across many different timelines. You may own a tarantula that's very calm as a sling, but it can go through a few molts and become very aggressive and hyperactive. It's also possible to own a tarantula that's perfectly fine with being handled one day, and then is entirely against contact with you the following day.

You can never be sure how your tarantula is feeling on a particular day or how they'll react to certain stimuli. "Calm" species can randomly act aggressive, and "aggressive" species can randomly act sweeter than ever. Therefore, you can never be fully confident in holding your tarantula and putting their health on the line for even a quick handling experience.

​I've mentioned the danger that a tarantula could pose to you several times already, but I haven't yet elaborated on it. How exactly could one of these tarantulas pose any type of threat to a human?

There's two main ways that tarantulas can harm you, and those are through their fangs and their hair. Neither of which are very pleasant.

​To begin with, you should never even think about handling an old world tarantula under any circumstance. These are tarantulas that are well-known for their aggressive, fast movements, and overall lack of predictability. On top of that, they pack an absolute wallop with their bite, using it as their main line of defense. Some owners will post videos or pictures of them handling particularly dangerous tarantulas, but please don't get inspired -- this is just plain reckless.

If you're doubtful about this, read through Arachnoboard's bite reports to get an understanding for just how serious a tarantula bite can be. There are no recorded cases of a human dying from a tarantula bite, but there are countless cases of extremely painful bites that have caused prolonged pain, cramping, vomiting, swelling, and even hospitalization!

A tarantula doesn't even need to be an old world species to pose a threat with their bite. New world tarantulas, even with their urticating hairs, can use their fangs as an extra line of defense. These tarantulas bite less frequently and tend to have less potent venom, but it still feels like a hornet sting when they sink their fangs into your skin.

Whether or not a tarantula bite causes extreme pain, one thing is universal -- it will cause you to react, and may result in your tarantula falling and hurting itself. ​There are very few people that can maintain perfect composure after a tarantula bite. Most will pull their arm back reflexively, launching the tarantula off somewhere. Even a short fall can be fatal to a tarantula, so an unexpected bite often means a death sentence.​​​

​New world tarantulas have the defensive feature of urticating hairs, which are short barbed hairs that they flick at their attacked to cause severe irritation and pain. The concept of attack hairs is often ignored by most people, but the reality of the situation is that it's no laughing matter.

Some people's reactions to these hairs are beyond serious proving that they're not just a small annoyance. A well-placed attack can cause irritation for days at a time, and may even require a hospital visit if the hairs get into your eyes or throat.

One fascinating fact about these hairs is that most people don't become more tolerant to them as they're attacked. Instead, most people find that they become more reactive to the hairs each time that they're exposed. Therefore, one bad attack can result in you never wanting to experience it again.

​How To Manipulate Tarantulas

Regardless of what I've laid out above, some tarantula keepers stand by the idea that it's safer and easier for them to use their hands when manipulating and moving their tarantulas. If you're very experienced, use protective gloves, masks, and clothing, and keep the tarantula only an inch or two above the ground, it would theoretically be okay to do this.

However, I have never encountered a situation where I absolutely need to use my hands to move my tarantula. I always manipulate them in other ways that are much safer for me and for them.

Any time I am doing a rehousing, my main goal is to move slowly, purposefully, and cautiously. I want to expose my tarantula to as little stress as possible and keep it far ​out of harm's way. If for any reason the transfer starts to go south, I simply stop and wait for the tarantula to calm down before attempting to move it again.

There are many different videos online that show responsible owners moving and rehousing their tarantulas without ever "handling" them. It's a simple process that only takes a bit of patience to do successfully. Below is an excellent example of this technique: 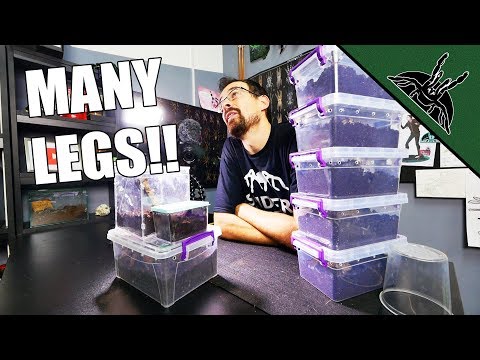 ​There are a wide variety of different tarantula keepers in existence. If you're one of the keepers that still has a very strong desire to handle your tarantula, I can't do anything to stop you. All that I would tell you is to go about handling in the safest way possible. Always move slowly, keep yourself protected, and know when to stop if things start to go poorly.

If you're ever tempted to handle your tarantula, especially if it's a particularly aggressive species, just take a few minutes to observe it. Look through the glass of its enclosure and observe it going about its daily life in all of its splendor. 99% of the time this will help you appreciate the tarantula and help you realize that you don't need to handle it to fully experience it.