If you were to ask any tarantula enthusiast about their picks for the most beautiful tarantulas, there's a very good chance that Chromatopelma cyaneopubescens would be towards the top of their list. The Greenbottle Blue Tarantula is one of the most well-received and most desired tarantulas today due to its brilliant appearance and fascinating, agreeable personality.

This post will go in depth about C. cyaneopubescens, covering details about its appearance, temperament, and dietary and environmental needs. Knowing how to properly care for this tarantula species is the main step in fully appreciating just how incredible it is.

The appearance of the Greenbottle Blue Tarantula is what initially draws most people to it. There are quite a few different tarantula species that flaunt the color blue, such as Chilobracys dyscolus, but this species goes beyond that. Their body is divided into three main colors that look beautiful together.

First of all, their abdomen is covered in a gradient of bright orange-red hairs that contrast the rest of their body. This is attached to a carapace that's colored metallic-green, which is a different color from their brilliant metallic-blue legs. The entire body is then covered in orange hairs that add another layer of depth to its wonderful appearance. There are very few species that have such diverse physical features.

One excellent trait is that Chromatopelma cyaneopubescens is stunning even in its early sling stage! While its features aren't as clearly defined, you can still observe the same distinct coloration in slings around 1" in size.

Speaking of size, this isn't a very large tarantula, with most adult specimens not exceeding a legspan of 5". They're not the largest tarantulas by any means, and they don't even get to this size quickly, but they have a brilliant personality and temperament to go along with their very unique appearance. While the appearance of the Greenbottle Blue is what initially attracts most people to it, it's their relaxed temperament that makes them truly appreciate this species in its entirety. C. cyaneopubescens is regarded as being an extremely low-maintenance, hardy, docile tarantula that's excellent for keepers of any experience level.

This is a new world tarantula, which is a type of tarantula that's generally known for its relaxed personality and preference to take a flight-over-fight approach when it comes to danger. In short, new world tarantulas are generally recommended for people that don't want overly-aggressive and difficult tarantulas, and Chromatopelma cyaneopubescens is no exception to that classification.

To begin with, these tarantulas aren't "perfect" in the sense that they're calm and collected 100% of the time. Due to their nature, they can be skittish at times, especially as spiderlings. This could result in them flicking their urticating hairs at you if you disturb their enclosure too much.

Therefore, it's not recommended that you handle this tarantula (or any tarantula, for that matter). However, for the most part, this species moves slowly and purposefully.

An interesting characteristic of this species is that it's an extremely heavy webber. This web serves two main purposes, which are trapping prey and protecting the spider from the harsh environment surrounding it. Therefore, it's recommended that you supply plenty of anchor points within their enclosure, such as rocks or plastic plants, that they can build their web off of.

Finally, Chromatopelma cyaneopubescens is a fantastic eater. This species will attack its prey with a vengeance and will always put on a show for you during feeding time. This helps to solidify this tarantula's position as a great display tarantula. 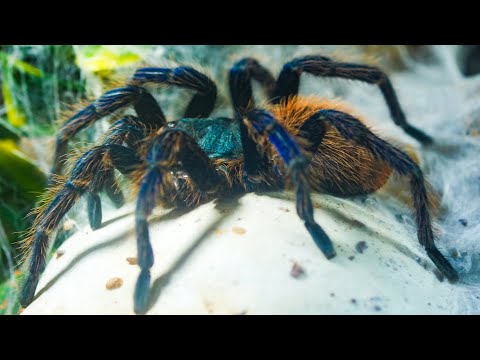 If you're looking to bring home a Greenbottle Blue Tarantula soon, you need to make sure that its enclosure is complete and ready to go before they're brought home. This may be a calm species, but it still doesn't like to be messed with, so you should aim to interfere with its enclosure as infrequently as possible.

To begin with, this species is native to Venezuela. The fact that it's from Venezuela makes many keepers think that they have to keep their enclosure very humid to match their natural habitat. Unfortunately, overly-humid enclosures are very harmful to this species!

C. cyaneopubescens actually comes from a small peninsula called Paraguana that features more of an arid climate. Here, this species can be found forming burrows into the sandy soil, often below bushes and rocks.

It isn't a difficult task to create the perfect enclosure for a Greenbottle Blue. To begin with, these are strictly terrestrial tarantulas that have a very strong desire to burrow. Because of this, their enclosure needs to provide plenty of space and depth to create deep burrows and the intricate webs that accompany them.

While this species is on the smaller size, it's still recommended that they're kept in a decently-sized enclosure. The Exo Terra 18"x18"x12" glass terrarium provides plenty of space for Chromatopelma cyaneopubescens to explore, burrow, and web without feeling cramped. We specifically recommend this enclosure due to its sturdy build, accessible design, and optimal dimensions for this species.

The inside of the enclosure needs to be as burrow-friendly as possible. This can be done by layering the bottom of the enclosure with about 6 inches of moisture-retaining substrate. Then, on top of that, supply different accessories such as rocks, a hide, fake plants, and a necessary water bowl.

In the wild, Chromatopelma cyaneopubescens experiences quite a warm and dry climate. However, this is a species that burrows and tends to stay in their burrow for long periods of time, so they generally avoid the worst of the outside temperatures.

Therefore, it's more than acceptable to keep a Greenbottle Blue enclosure around 75-80°F. Temperatures slightly colder than this would also be acceptable, but they aren't exactly optimal. If your house isn't warm enough, consider using a space heater to heat the entire room that the tarantula is kept in. Localized heating units like heat lamps and mats could be harmful to tarantulas, so they should usually be avoided.

The natural environment of this species is also quite arid, meaning that humidity levels can be lower than what is required for other species. Aim for around 50-60% humidity within the enclosure.

This humidity level can be maintained through a combination of occasional misting with a spray bottle and the presence of a water dish. It's important that the enclosure doesn't become too saturated, though, so use a hygrometer to monitor humidity levels and make adjustments as needed.

Greenbottle Blue Tarantulas may not be the biggest tarantulas, but they still need a plentiful and nutritious diet in order to grow into the stunning specimens that we all appreciate. Fortunately, it's very easy to supply a good diet, as they'll readily accept crickets, mealworms, and dubia roaches as staples of their diet.

As previously stated, this is a very ravenous species that's almost always down for a good meal. They'll rarely, if ever, reject a meal unless they're starting to enter premolt. This makes them a great deal of fun, as they'll happily attack and eat any food that you place into their enclosure. 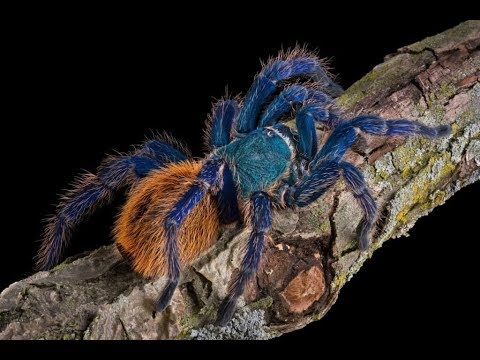 Captive tarantulas rarely ever run into health problems. The two most prominent issues that owners can run into are dehydration and mites/parasites -- both of which are very easy to deal with if acted on promptly. Therefore, as long as your Chromatopelma cyaneopubescens enclosure is set up and maintained properly, your tarantula shouldn't run into many problems at all.

Be cautious when housing this species, though, as it is susceptible to side-effects from high levels of humidity. Keep the substrate damp, but not swampy. Excess moisture in the enclosure can cause many different health problems, including death.

Additionally, while it is rare, some tarantulas may encounter problems with their molt. In the event that a molt gets stuck, you'll need to carefully help your tarantula finish the molt. Fortunately, there are quite a few guides online that would help to walk you through getting your spider through their molt.

Greenbottle Blue Tarantulas are very well-received within the tarantula community and thus fetch a decently high price. The combination of a unique appearance and and great personality make this a species that doesn't go for very cheap -- even as a young unsexed sling.

Several online marketplaces offer these tarantulas for sale at a variety of different price points. The cheapest specimens you'll find will be new-born slings, and those tend to go for around $60. Older slings or juvenile specimens sell for around $80 to $90, while sexed mature females will sell for several hundred.

Despite the very large price tag, this is a tarantula that is well worth the investment. For $60, you'll be hard-pressed to find a tarantula that has such a remarkable appearance and manageable personality. Very little compares to the experience of seeing a Chromatopelma cyaneopubescens in person in direct sunlight.