With over 800 different species of tarantulas in the world, you will often come across many interestingly obscure types of spiders. Some may have a peculiar color pattern to scare off predators, while others … Whatever the case may be, you might run into a tarantula as unique as the Ephebopus murinus, otherwise known as the “Yellow Knee Skeleton” or “Skeleton Tarantula.”

This guide aims to inform you of all the must-knows for caring for and acquiring a Skeleton Tarantula. From its visual appearance to dietary needs, we will cover everything you need to know about the Ephebopus murinus!

As its nickname implies, the Yellow Knee/Skeleton tarantula is commonly seen with yellow stripes with a brown stripe in the middle, along its black legs, displaying a skeleton-like pattern. The abdomen of an Ephebopus murinus is a light shade of brown and smaller than other tarantulas, alongside a carapace that takes on a golden or yellow hue.

If you obtain an E. murinus spiderling, expect to see this yellow skeleton-like pattern early on, as this spider grows at a quite a fast rate when compared to other new world spiders.

When it comes to size, a E. murinus is smaller than your typical arachnid. Most adults reach a leg span of roughly 4 to 5 inches in length. In terms of lifespan, male spiders have a much shorter lifespan of 3 to 4 years, whereas females have much more time, living up to almost 15 years in total life.

It is also worth mentioning that female variants can potentially grow up to 6 to 7 inches in length, so you may want to consider purchasing a larger tank if you are looking to own and/or breed more Skeleton tarantulas due to females’ larger size and longer lifespan. The Ephebopus murinus is not a spider that you will typically spend a lot of time being hands-on with or​ handling in general. While its venom is of a milder toxicity and possibly not lethal to humans, it still has a rather sharp bite that may leave you with a stinging sensation. It can be quite aggressive in nature, and its smaller size contributes to faster movements, so use caution when handling a Skeleton tarantula.

As a new world tarantula, it possesses urticating setae (hairs) that it will brush off against its chelicerae, launching them at predators to inflict mild to severe irritation. What makes the E. murinus different than other spiders is that its urticating hairs are not located on its abdomen—a trait that most new world spiders possess—but are found on the spider’s palps.

While this defense mechanism may seem intimidating to collectors, it should be known that a Skeleton tarantula will most likely choose to flee rather than fight, using its small size and fast speed to its advantage in escaping potential attackers.

Furthermore, Skeleton tarantulas often dig small burrows to reside in, and spend most of their time underground, being shy creatures. Given that the E. murinus is found in South American countries such as Brazil and French Guiana, the burrows are typically shallow and not as deep and intricate than what other spiders might make. Webbing is often seen around the entrance and covering the inside of its burrow.

Keeping in mind that the Ephebopus murinus is commonly found in tropical environments, specifically forests, so you will want to ensure that a proper temperature and humidity level is maintained for the spider’s enclosure. Regarding temperature, anywhere from 76⁰F to 80⁰F is ideal for its enclosure, but as this spider prefers to burrow underground to avoid any harsh sunlight, you do not want to potentially overheat its enclosure.

As for humidity, try keeping the humidity at least over 75%. 80% to 85% humidity is ideal, so you may want to spray the substrate with a mist of water once a week. Be careful on over-misting the substrate, as mold and fungus may grow inside their burrow, causing stress to the spider. 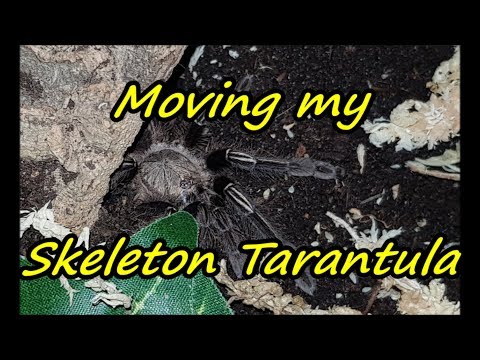 Fortunately, an Ephebopus murinus is not the type of spider that requires complicated housing arrangements. As a burrowing and terrestrial tarantula species, you will want a tank that is long enough and has enough volume for it to form its own burrow. Every now and then, they will produce some webbing, so they might need anchor points of some sort to attach their webbing onto.

A suitable enclosure base would be the Exo Terra 18”x18”x12” glass terrarium for a fully developed E. murinus. The size of this enclosure is large enough for a Skeleton tarantula to dig its burrow and plenty of room for you to include leaves and branches so that it feels more at home! This housing also features very secure doors, eliminating any worry about the E. murinus making a grand escape given its speed.

Allow for a 6 to 8 inches of substrate for a Skeleton tarantula to make a deep enough burrow. Although they are typically lowland creatures, they still prefer plenty of room.

Spiderlings can typically reside in half the amount of substrate an adult would require, but considering their fast growth rate, you might still want to leave a decent amount of substrate remaining. Feel free to include a water dish and decorate the enclosure with a sizable hide, rocks, moss, and plants to make your tarantula feel at home.

In regards to diet, this spider is not that much different than most new world tarantulas. It prefers a typical meal consisting of roaches, crickets, meal-worms, and other insects of the sort. Some small mammals are also acceptable in this tarantula’s diet, such as mice or lizards. Only feed these larger creatures on very rare occasions, and try to avoid food that's larger than the tarantula's body.

To contribute to its faster than normal growth rate, an Ephebopus murinus can eat quite a lot and always welcomes an additional snack after a delicious meal. Make sure that you clean and replace water in its water dish regularly to prevent any algae or fungal growth. 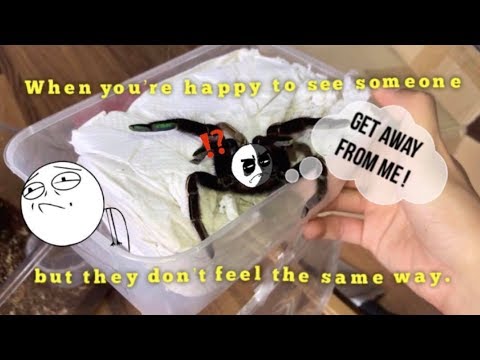 As long as you are properly feeding and maintaining its enclosure, you should have no trouble in caring for an Ephebopus murinus. The most common issues some collectors may experience include dehydration and parasite/mite problems. Fortunately, these issues are easy to alleviate through supplying enough water and cleaning out its enclosure regularly.

Every now and then, a spider may have issues with its molting process, and if that is the case, there are useful guides available online for how to expedite your spider’s molting period.

A Skeleton tarantula can be hard to come by, especially in the United States. Fortunately, there exist online communities that are dedicated to gathering information and collecting and distributing exotic creatures like the Ephebopus murinus.

For instance, websites such as Underground Reptiles and Back Water Reptiles happen to have Skeleton tarantulas at affordable costs. Some young slings are even available for prices as low as $25 to $35.

These low-price points make acquiring a tarantula as unique as the Ephebopus murinus quite a great deal. This has contributed to a growing fascination in Skeleton tarantulas with its stunning visual pattern, peculiarly shy, yet aggressive nature, and astonishing speed. You might not see this spider out of its burrow all that often, but when you do, admire how its overall uniqueness makes for an interesting addition to any arachnid-lover’s collection!