They have hairy bodies, 4 to 8+ eyes, and typically 8 long legs. They’re spiders! No two species of arachnids are ever the same, as they come in so many varieties to count! Today, we will be looking at one specific type of tarantula that is sure to peak anyone’s interest: the Aphonopelma seemanni, otherwise known as the Costa Rican Zebra or Striped-Knee tarantula!

This article will discuss all that you need to know for when it comes to obtaining, raising, and managing an Aphonopelma seemanni spider. Hopefully by the end of this guide, we will have answered all your questions on the A. seemanni, and if not, feel free to message us with any further questions!

Your average Aphonopelma seemanni will have a dark brown coat, complemented by bright white or beige-colored stripes running along its legs. This striped pattern is what gives the A. seemanni its “Zebra” and “Striped-Knee” nickname. These spiders may also come in variants with more blackish hairs on its abdomen, but these are more difficult to breed and locate, so brown coats are much more common to find.

Size is definitely an important factor when it comes to choosing an enclosure or deciding how much food is necessary for your tarantula. In this case, a Striped-Knee tarantula can fully grow up to 4 to 5½ inches, including the length of its legs, so a medium-sized enclosure is recommended.

In addition, these spiders have a rather medium growth and development rate from their spiderling stage, where female spiders tend to be much larger than their male counterparts once they reach maturity, which is around 3 to 4 years.

It is also worth noting that a female Aphonopelma seemanni will most likely outlive the male tarantulas, as the females possess a longer lifespan of about 20 years, whereas the males live up to 5 years at the most—another factor to consider when acquiring this spider. While not as aggressive as many other new world spiders (which aren't very aggressive to begin with), the Aphonopelma seemanni can still be a generally defensive creature when threatened. Its venom is not toxic enough to cause lethal damage to humans, but its prickly hair can be shed and flung at predators to irritate their skin and potentially blind them if hairs impact the pupil.

However, for the most part, your typical A. seemanni is rather shy and will only attack as a last resort. It typically prefers to take flight instead of fighting back against an attacker. It's generally suggested to not handle this tarantula at all, though, as it prefers being on the ground where it is most comfortable.

Given their small size, the Aphonopelma seemanni will avoid going out directly during the day as it makes for an easy target for hawks or large lizards to pick off. Therefore, they are nocturnal, burrowing spiders, spending their mornings deep underground and coming out during the night to hunt for food. Their small size also allows for generally faster movements, giving it the speed necessary to run back to its burrow to escape nocturnal predators.

This personality trait makes for a very interesting tarantula that many people enjoy, but it also makes for a species that's not great on display. When it comes out of hiding, though, is when it can be truly appreciated.

As these spiders are found in warmer climates of Central Africa, including countries such as Honduras, Nicaragua, and of course Costa Rica, they construct deep burrows to also avoid hot temperatures. They typically reside in the rain forests of the aforementioned countries, and therefore, require need quite a lot of humidity to stay in proper health.

With this in mind, collectors should adjust the temperature to 70⁰F to 85⁰F and humidity levels to 65% to 85%. While these are rather large ranges that the Aphonopelma seemanni can withstand, you do not want to keep it exposed to constantly cooler temperatures, as it will spend most of its time underground anyways to escape heat.

As they typically belong to rain forest environments, you will want to stay on top of keeping the humidity at a proper level. Be sure to regularly change its water dish with fresh water daily, and to keep half of the substrate dry and the other half moisturized with a spray bottle filled with water weekly.

You may also want to include a small log or piece of bark for your A. seemanni to hide in once it is first introduced to its enclosure and keep it there so that it has an area to hide if feeling threatened. This can reduce risk of the tarantula possibly hurting you, serving as a sign that it may need some space. 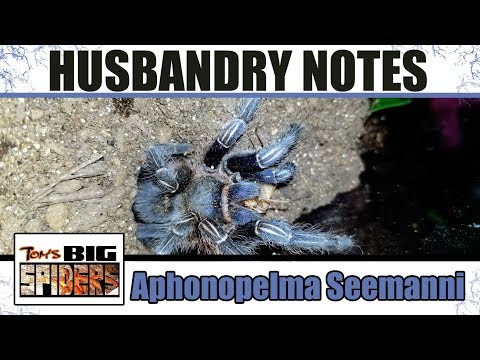 Besides watching out for temperature and humidity, the Aphonopelma seemanni is a rather easy spider to care for and requires simple housing arrangements. As a deep-burrowing terrestrial spider, you will want to include about 4 inches of firm substrate to form its burrow, ideally consisting of a blend of potting soil, dirt, coconut fiber, and peat moss.

Be sure to make room for some areas in your terrarium that do not include large amounts of moss in the substrate, as you will want your spider to easily make its burrow.

There are a lot of different options when choosing the proper enclosure for your Striped-Knee tarantula, and fortunately we have a detailed guide on all the best enclosure choices for your spider. One enclosure we often recommend that has enough space for your spider to burrow is the Exo Terra 18”x18”x12” glass terrarium.

This enclosure provides secure doors so that you do not have to worry about your A. seemanni bolting out, as well as enough room for it to fully development and include decorations to make your spider feel at home.

The Aphonopelma seemanni is not a picky eater. It has very straightforward dietary choices to regular spiders of its kind. Adults usually eat a variety of insects, namely grasshoppers, locusts, and crickets.

If you have younger or baby Striped-Knee tarantulas, you can opt out larger critters for fruit flies and baby crickets to nourish your spiders until they reach adulthood. If you feel your spider has earned a treat, feel free to give it a small mouse of gecko.

The only stipulation being that you do not want to do this feeding ritual often, as it might provide too much calcium for your spider and cause molting complications in its exoskeleton, so you may feed it a mammal once a year at most. 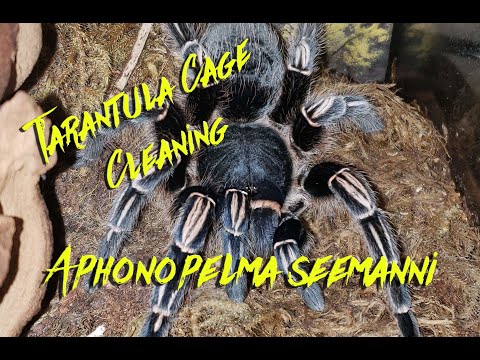 Maintaining proper heat and humidity levels can be two of the biggest hurdles when caring for an Aphonopelma seemanni. However, as long as you are on top of this, you should have little to no issues with this tarantula, as it already spends most of its time underground. If you notice your Striped-Knee spider not eating for extended periods, do not worry, as this tarantula has often shown signs of little consumption when prepping to molt.

In the case that you think your spider is having difficulty molting, ​there are online guides available to help you expedite the molting process and avoid future complications.

Parasites and mites can also become a problem for captive tarantulas, but they're very rare and shouldn't be of too much concern.

Most collectors choose the Aphonopelma seemanni for its intricate visual pattern and ease of maintenance. Thankfully, you can find a Striped-Knee spider on websites such as Underground Reptiles and Black Water Reptiles for prices as low as $25 to $30.

Dedicated online communities have made acquiring these types of tarantulas easy for collectors, and they have provided useful information on caring for your very own Costa Rican Zebra tarantula!

The aesthetic pattern, low pricing, and interesting nature of the Aphonopelma seemanni has made them a great addition to any spider-lover’s collection. Remember, some of the biggest factors in maintaining your Striped-Knee spider’s health and well-being is by providing enough room to dig its burrow and adjusting the temperature and humidity levels accordingly.

This spider may spend most of its time underground, but when you do see it pop up at night, take a moment and appreciate all that it has to offer!