Every day, spider owners ask dozens of extremely inquisitive and thought-provoking questions. These questions range from husbandry to behavior to personal preferences on favorite species. However, sometimes questions come up that are a bit more simplistic, such as the question: "Do spiders poop?"

This post will aim to address that question with not only an answer, but also some helpful facts and tips regarding spider poop.

Like every other living creature that eats food, yes, spiders poop. They're not an exception to the extremely popular children's book "Everybody Poops" -- although they aren't specifically highlighted in that book.

These little creatures possess the ability to create poop, and they actually do so quite frequently! To be scientific, the solid excreta of insects is actually called "frass".

Now, the frequency of the poop and the actual consistency does vary quite a bit. This can make it a little bit difficult to identify (although some poops are nearly impossible to miss). Regardless, every spider creates some type of waste from the food that they eat and digest.

In addition to poop, some spiders create something called a "bolus", which is essentially an indigestible ball of the carcasses of their prey and some accidentally-ingested webbing. These look like exactly what they are -- a white ball of mangled insect parts. If you're not sure what to look for, you may not ever see spider poop in the wild or in your spider's enclosure. Their waste takes on an appearance that's essentially a smaller version of bird poop, and this is for a reason that's quite interesting that will be explained a bit later.

The consistency and coloration is extremely similar, making it easy to spot if you're looking for it.

Spider poop is very common to find underneath spider webs or under a location where spiders have been present for a healthy amount of time.

This poop usually looks like small round-ish drops that are colored either white, cream, or light brown and have small black spots. Pieces tend to be around 1/10 inch in diameter for average-sized (about 3 inch legspan) spiders.

However, there are some exceptions to this description. Larger spiders like tarantulas can produce massive amounts of white excrement at once. This poop tends to get a bit less viscous and more watery, but dries relatively quickly and becomes as hard as concrete.

Some tarantula species love to act a bit wild with their poop and possess the ability to spray it up to several feet. This can be used as a line of defense, and is actually frequently utilized by the popular species Avicularia avicularia, or the Pink Toe Tarantula.

If you've ever owned a pet, you know that poop cleaning is a big part of day-to-day maintenance of that animal. Spiders are no exception!

Since these creatures are capable of creating a healthy amount of poop, cleaning up their poop is simply a part of good spider husbandry. Or, if you're researching this under the context of spiders as pests, it's also good to know how to clean their poop from your home.

I first want to state that spider poop isn't inherently dangerous to be around. When it is fresh, this waste shouldn't be harmful for you to be around unless it's in extremely large amounts.

However, if it's been sitting around for a short while, it may become home to several different pathogens that could cause problems. So be sure to clean the spider poop as soon as possible!

Spiders are strange creatures and can either be very clean or very messy. Many spiders will opt to use the bathroom in one location in their enclosure -- often in their water dish to the dismay of many keepers. Others will simply spray poop freely. Fortunately those spiders are a lot less common. 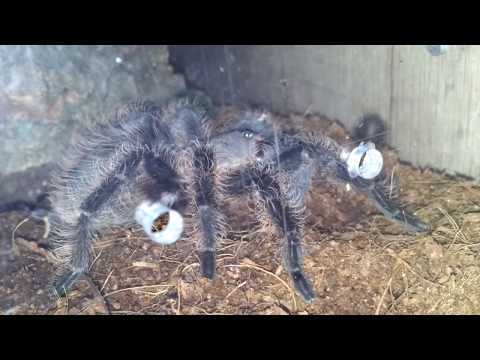 Spider poop is incredibly easy to clean when it's fresh. Simply take a damp paper towel and wipe up the excrement -- easy! If you own a particularly mean tarantula, it may take a bit more effort to clean up everything, but it's still very easy.

Once the poop has had time to dry, though, it can get a bit more difficult to remove. If the poop is in your spider's enclosure, you'll still only want to use a paper towel and water as cleaning chemicals can potentially kill your spider.

Scrub the poop vigorously to get it off the enclosure, using a small nail or chisel to dislodge it if needed.

If the poop is in an area that allows for the use of chemicals, there are several products available that make short work of the poop. A popular choice is Star Brite Spider and Bird Stain Remover. It's important to find a cleaner that lacks bleach and is entirely non-toxic.

Now that you know that tarantulas poop, the natural question of their urination will likely follow. The answer to this question is also a "yes"! However, spiders don't pee in the same way that you and I do.

Spiders don't produce urine, but instead produce uric acid. This acid doesn't dissolve in water and is almost solid in structure. Uric acid is produced because spiders don't lose as much water as other creatures do.

In fact, they have a lot of systems and features in place to preserve as much water as possible!

The uric acid is formed in things called "malpighian tubules", and it drains into a pouch in the digestive tract where it combines with the solid waste. Thus, when spiders poop, it's actually a combination of urine and feces!

Remember back to when I said that spider poop is similar to bird poop? Birds also produce uric acid and combine it with their feces into one unit. This helps to explain the similar characteristics between the two poops! 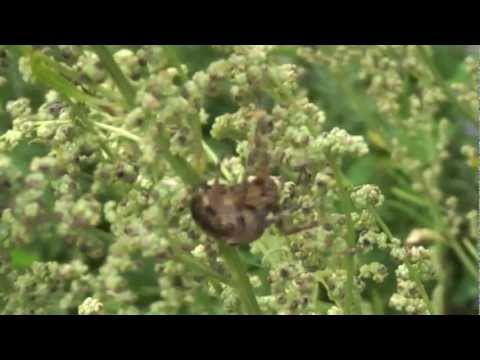