​Some tarantulas are popular among beginners, while others are limited only to hardcore enthusiasts. However, there's also some species that are enjoyed by everybody due to their all-around great appearance and temperament. ​Brachypelma albopilosum​, or ​​​the Honduran Curly Hair tarantula, is one of those species.

This guide will tell you all that you need to know about this fascinating tarantula species in terms of what to expect and how to care for them properly.

​One of the main reasons why this tarantula is so popular is because of its great appearance! Some people want tarantulas because they're scary or intimidating, while others aim for "cute". This tarantula is definitely cute.

​B. albopilosum ​is quite a heavy-bodied tarantula that's covered in dark/brown hairs as a base, while tan and gold hairs that are characteristically curly sprout up all over, giving it a fluffy and, frankly, adorable appearance. This approachable tarantula has brought many tarantula owners into the hobby​​​ and made it a favorite.

This tarantula has a fairly average growth rate, reaching its maximum legspan from its spiderling stage in a couple of years. However, it is quite fast compared to other tarantulas in the genus, making it more attractive for beginners as there's a quicker payoff.

While they are cute, females are able to reach 6" in legspan, which is certainly not small. Overall, while its coloration isn't as crazy as, say, ​Chromatopelma cyaneopubescens​, it's a very attractive tarantula that catches the eyes of beginner and experienced keepers alike.​​​ ​While the appearance is great, its the temperament of this tarantula that really solidifies it as a great addition to any collection. The ​Avicularia ​genus is known as the genus for beginner-friendly tarantulas, but ​Brachypelma albopilosum ​gives them a run for their money.

To begin with, this is a new world tarantula, meaning that it's very laid-back, friendly, and prefers to run away instead of fighting a potential threat. This essentially means that new world tarantulas are easier to care for and are highly recommended for beginners or keepers that don't want to deal with dangerous species.

​B. albopilosum​ is no exception to the new world tarantula stereotype. It's exceptionally laid-back and owners report virtually never seeing them throw up a threat pose or flick urticating hairs. ​​​​​​​​​Many owners hold this tarantula frequently without issues, but we can't recommend that you handle any tarantula.

While it's a docile species, that doesn't mean that it doesn't have spunk. In fact, the Honduran Curly Hair is said to be one of the most active tarantulas, making it a lot of fun to observe. It moves about its enclosure frequently, stays quite visible, and even rearranges its enclosure regularly.

​Whenever you bring a new tarantula home, you need to make sure that it is given the best enclosure possible from day one. This will help to keep your tarantula happy, healthy, and content -- all things that increase its quality of life.

This particular species is from Central America -- specifically Costa Rica, Honduras, and Nicaragua. In this habitat, they experience quite an average climate with temperatures year-round between 70°F and 90°F and humidity levels around 60-70%.

These are very moderate conditions, meaning that they won't require a lot of special care when it comes to the climate of their enclosure. 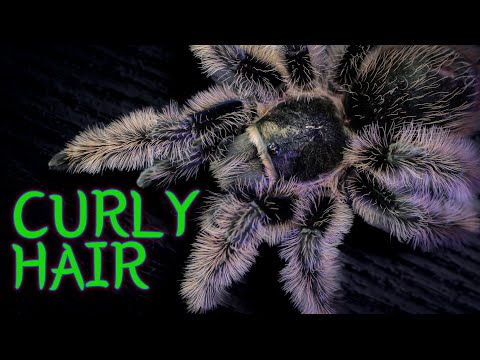 ​It's quite easy to provide this tarantula with an optimal enclosure. It does have specific environmental needs, but they aren't hard to meet. First of all, this is a terrestrial tarantula, meaning that it spends all of its time on the ground.

Because of this, ​Brachypelma albopilosum ​requires a typical terrestrial tarantula enclosure -- an enclosure that's longer and wider than it is tall. Copious amounts of floor space is a must!

​The Exo Terra 18"x18"x12" glass terrarium provides this tarantula with plenty of room to create webbing, rearrange its enclosure, and create burrows to hide out in. It's also exceptionally accessible and provides great visibility.

Inside of the enclosure, you'll want to provide your tarantula with several inches of moisture-retaining substrate, a sizable hide, a water dish, and a couple of rocks and fake plants. There aren't a lot of essential supplies that your tarantula needs, so don't skimp out when creating their enclosure.

​While this may not be the biggest tarantula out there, it's certainly one of the best eaters! Owners state that this is one of their most ravenous tarantulas, attacking its prey quickly and efficiently subduing it. For people that are looking for an entertaining tarantula, this is a great trait!

Spiderlings are given flightless fruit flies due to their very small size. As they age, though, food can become larger. Adults are typically given an adult cricket every single day, or two adult dubia roaches per week. 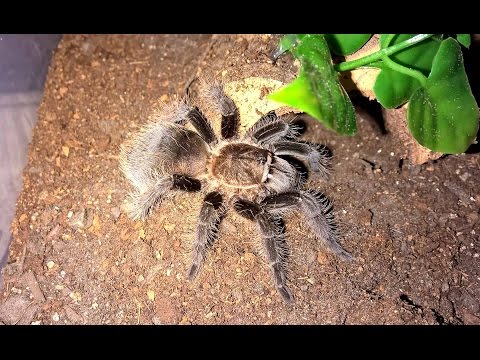 ​This tarantula species is particularly hardy -- another great trait for beginners! ​Brachypelma albopilosum ​can thrive in a ride spectrum of different temperatures and humidities. It's also not predisposed to any health issues. The main issues that you could possibly run into are dehydration and parasites/mites. Both of these are easy to prevent and deal with.

While it's rare, it's possible that your tarantula may experience problems with its molt. A stuck molt can be a death sentence ​​​for a tarantula, so you'll need to intervene in this case. Fortunately, it's quite easy to help a tarantula due to the copious amounts of helpful guides online.

​If you want to purchase one of these tarantulas for yourself, you should have a decently easy time acquiring one! Popular tarantulas like ​Avicularia avicularia ​tend to be quite cheap and accessible because everybody wants one and they're relatively common.​​​

You can find ​Brachypelma albopilosum ​on sale in many different online marketplaces. Spiderlings, unsexed juveniles, and sexed adults are all available for decent prices. Slings tend to sell for around $30, unsexed juveniles are about $50, and sexed adults are about $75 for males and $100 for females. Prices do vary widely, but they're typically all around that range.

So, if you're looking for an excellent tarantula that has a unique appearance, easy-going and interesting personality, and easy care requirements, look no further than ​Brachypelma albopilosum​. It's affordable, agreeable, and a great addition to any tarantula collection.​​​​​​