Every ferret owner wants to provide their ferrets with safe and comfortable living conditions. Perhaps one of the most important aspects of a ferret's cage is the litter that's used within it! The litter that you choose plays a big role in odor absorption and overall cleanliness of the cage, not to mention your ferret's health.

With your litter choice having such a big impact, it can be intimidating trying to find the best ferret litter for your carpet shark. That's why we've created a list of the 5 best ferret litter options available today, in addition to a handy buyer's guide so that you're armed with all of the knowledge that you'll need to be a responsible ferret owner.

Very absorbent paper pellets that use baking soda to control bad odors and are virtually dust and allergen free.

Sustainable pellets that are great at absorbing liquid and blocking odors yet remain firm and in-tact when damp.

Litter that was constructed for cats but meets the needs of ferrets through its great absorption, odor control, and lack of dust.

Standard ferret litter that checks all of the boxes for absorbency, odor control, and overall effectiveness.

A litter that is made from bentonite instead of paper, but still remains natural, safe, and effective in all aspects.

How To Litter Train A Ferret

Litter training a ferret is an essential step in maintaining a clean cage and a clean carpet! Fortunately, ferrets are very easy creatures to litter train due to a couple of their tendencies and mannerisms.

Ferrets love to poop in corners because it gives them a full field of view and helps them feel safe, so they're going to be pooping in a corner of their cage anyway. All that you have to do is introduce a litter box to a corner and get them using it! 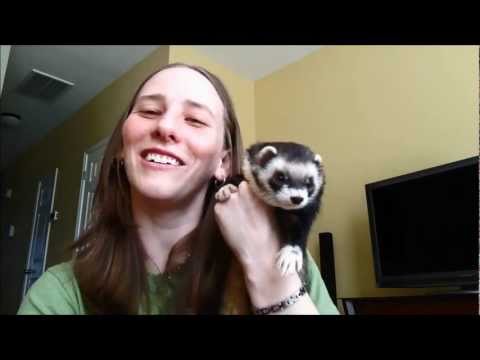 You could have the absolute best ferret litter with great odor control, but it will only be partially effective if you're not taking other factors into consideration. Taking action on these tips will ensure that your ferret's litter box and cage are much easier on your nose.

Can I Use Cat Litter For My Ferret?

In short, cat litter can be used for ferrets. However, it's not that straightforward. There are many, many different kinds of cat litter out there, and only a portion of it is truly suitable for ferrets.

The safest and best cat litter for ferrets is cat litter that's made from recycled paper. This is considered the safest litter because of the fact that it's dust-free. Ferrets absolutely love to dig, and this often involves them pushing their face into whatever they're digging in. If a litter is dusty, it can get into a ferret's nose and cause respiratory problems.

Wood shavings also need to be avoided because they can contain essential oils that are harmful for ferrets to breath in and can cause problems with the esophagus or lungs. The actual wood fibers can also cause splinters or get lodged in the throat or nose. What Defines The Best Ferret Litter

While there are a bunch of different litter options available, not all of them fit the specific needs of ferrets. In fact, some litter is downright harmful for ferrets to be around! So, you'll want to ensure that the litter you choose has the characteristics listed below. Don't worry, we've based our selection off of this list, too.

What Is The Best Ferret Litter?

While it's overwhelming to look at all of the litter options out there, choosing the best litter for your ferret isn't a difficult task when using the buyer's guide above. Fortunately, there are several litter options that meet all of the requirements that ferrets have.

It's also important to remember that cleanliness is an important factor. You may have chosen the best litter for your ferret's litter box, but if it's dirty and isn't changed frequently, it's just as effective as the lowest quality stuff.

In terms of paper litter, this paper pellet litter by So Phresh is one of the best options available. Being especially crafted for small animal habitats, it easily meets all of the needs of a ferret. The pellets are made from 100% recycled paper that's tightly packed so that it doesn't break apart when it gets wet but remains extremely absorbent. In terms of odor control, this litter does it very well, using baking soda to help eliminate odors at the source. It's also fragrance-free and 99% dust-free so that it doesn't irritate your ferret while they're doing their business.

An overwhelming majority of ferret owners are very happy with this litter. While it's a common experience to have paper litter crumble apart, this one remains in-tact while still being extremely absorbent. It's also noted that there's no smell to this litter, but it controls odors very well.

The one downside to this litter is that the pellets are fairly large as a couple of owners have pointed out. This makes it slightly difficult for ferrets to use the litter, mostly if they're picky about what they're standing on. However, with this size does come great absorption, so it is a bit of a trade-off. Despite this, most owners have no problem with the size of the pellets and say that their ferrets love it.

Fresh News is a smaller brand in the pet space, but they make some excellent products. This small animal litter is one of the most popular options for paper litter, and it's clear why that is. Like the So Phresh, this bedding also uses baking soda to control odors, meaning it does an excellent job removing the ammonia smell of urine, keeping the cage smelling fresh and clean. Overall absorption of this litter is fantastic, allowing you to get more bang for your buck. It's also 99% dust-free and made from biodegradable recycled paper.

The main compliment that ferret owners give this litter is that it absorbs odors extremely well. They state that it absorbs urine well and really locks in the bad smells that come with it. On top of this, it holds its form when it gets wet, which makes it very easy to scoop out of the litter box when the time comes.

Complaints about this litter are smaller things that seem to come down to preference. One owner stated that the litter didn't do an amazing job blocking all of the odors, and another stated that their ferret simply didn't like using it. Additionally, it's generally a bit pricier than some other litter options in this list.

If a ferret owner were to use cat litter in their box, this would be the litter for the job. Yesterday's News has been the go-to litter for many ferret owners for quite a long time, providing about the same effectiveness for generally more litter. It's advertised as being able to absorb 3x the moisture than clay litter, while maintaining a solid, easy to scoop pellet form that lacks dust. This litter also delivers effective odor control while not having any harmful or irritating added fragrance.

While most purchasers of this litter are cat owners, the ferret owners that use it are very happy with it. Owners say that the litter functions great, easily absorbing urine and sticking to poop to make it easy to scoop out of a litter box. They also state that the litter is very good at absorbing odors and locking them in.

Reading reviews for this litter, it appears that it's better suited for ferrets than it is for cats! There is a distinct lack of complaints from ferret owners, with only a few concerns being noted. A couple of owners state that isn't 100% dust-free, and others say that it lets some ammonia odor through. For the most part, though, these concerns are in the minority.

Marshall is, of course, the name in ferret products. So, it's no surprise that their ferret litter would make it onto our list somewhere. This litter is made from natural paper fibers that do a nice job of absorbing urine keeping their shape in pellet form to make it easy to scoop out. Special odor control ingredients work to fight the ammonia odors that are present in urine, helping to keep the cage smelling good and feeling cleaner. It's also, of course, manufactured to be dust-free to be gentle on a ferret's respiratory system.

This litter has roped in a healthy amount of ferret owners that won't use anything else. Many owners state that this litter is excellent at absorbing liquids, controls odors very well, and is easy to scoop out of the litter pan. It's also frequently said that it has a nice lack of dust and, and the biodegradability is a nice selling point for a lot of people.

There are a couple of issues that ferret owners have with this litter. First of all, some owners don't like the smell of it, noting that it does block bad odors but leaves behind a wet paper smell. It's also stated by some that the absorption isn't the best, and that it can show up dusty sometimes.

Kaytee has been providing budget pet products for years, and this litter is one of their better products that they offer. Unlike the other litter in this post, this litter is made from 100% bentonite, which is non-toxic, natural, and totally safe for ferrets. This bentonite absorbs up to 10 times its weight in water and does a great job of eliminating odors. The bentonite is also 99% dust-free so that it's safe to be around for ferrets and very easy for you to thoroughly clean out of a cage.

Ferret owners whose ferrets didn't like paper pellet litter generally had pretty good luck with this litter. Aside from the fact that ferrets usually don't have a problem using this litter, it's also great at controlling odors and keeping the cage smelling good. The clumping is great, too, and it absorbs urine easily.

The big issue that owners have with this litter is that it clumps well, but it turns into a sort of "sludge" that's pretty difficult to clean out of a cage. This means that the litter must be replaced often, which can nullify the great value a bit.

There are a ton of different kinds of ferret litter available, and each one comes with its own unique benefits. Ferrets have specific physical needs that need to be met by their litter, and if they're not, there could be some serious side effects.

This litter is an excellent choice for all ferret litter boxes. Not only is it 100% safe for ferrets to be around, but it's also very absorbent, excellent at controlling odors, and is biodegradable and environmentally friendly. All around, this litter checks all of the boxes for being classified the best of the best.