​Ferrets are long and fluffy tubes of energy. They're very playful and outgoing and always able to put a smile on your face. All of this energy doesn't come out of nowhere, though. In order for your ferret to be as happy and healthy as possible, they need to be fed an optimal diet.

So... what do ferrets actually eat? What should your ferret be eating? This post will tell you everything that you need to know about proper ferret feeding and nutrition.

​First and foremost, when determining what a ferret should be fed, it helps to know what they naturally eat in the wild. Over thousands of years, the digestive systems of ferrets have become fine-tuned for processing the foods that they commonly come into contact with.

Because of this, it's very important that your ferret has a diet that's similar to what they would naturally eat in the wild!

Ferrets are unique in the sense that they're ​obligate carnivores​, which means that they absolutely ​need ​to eat meat in order to get all of the nutrients that they need to live. Unlike standard carnivores that eat meat but can also eat plant matter, ferrets get by on only eating meat. Ferrets ​can ​eat plants, but they can't properly digest/process it, causing complications.

In the wild, ferrets eat almost anything that they can catch. This includes smaller animals like lizards and larger animals like rabbits, eats, birds, and even snakes. If a much larger animal like a pig were given to ferrets, they'd likely eat that, too.

So, wild ferrets eat meat. This is the main focus you should have when planning out your ferret's diet.​​​​​​​​​

​What Do Pet Ferrets Eat?

​While it's been established that wild ferrets eat meat, it doesn't mean that you have to feed your ferrets ribs and pork tenderloins every night in order for them to be healthy. Some owners do feed their ferrets raw protein like ham and eggs, but most owners don't.

As long as your ferret has a diet consisting of those three aspects, they should be quite healthy! However, it isn't as straight-forward as that. There are some foods and treats that on the surface seem great for ferrets, but upon further research prove to be quite harmful.

Therefore, one must look at the nutritional content of the foods that they're feeding their ferrets. Ferrets have specific nutritional needs that need to be met, and deficiencies in macro or micro nutrients could prove to be a hazard.

​It may be intimidating looking at the nutritional content of different foods and trying to figure out what's good and bad for ferrets, but it's actually not too difficult. There are some nutritional benchmarks that you should look for in every ferret food.

So, what exactly defines a good, healthy ferret food? One that has all of these characteristics:

​The high protein and fat content requirements stem from a wild ferret's diet of fresh-caught prey. Too little protein or fiber can ​contribute a large amount to undernourishment of your ferret. On the other end of the spectrum, too much fat can result in excessive weight gain.

​Fiber around 5% is the best for ferrets as it helps them process and digest food easily. They have extremely frequent bowel movements, so they need the fiber to support that.

Finally, grains, fruits, and vegetables should all be avoided due to them not benefiting ferrets at all. They're worthless fillers. This will be elaborated on a bit later in this post.

As for ferret treats, it may be tempting to get treats from companies like Marshall or Kaytee. These treats tend to be very low-quality and are full of fillers. Instead, opt for treats that are very simple and wholesome like salmon oil.

​Foods To Avoid Feeding To Ferrets (At All Costs)

​When thinking about what ferrets eat, it's also important to think about what ferrets ​can't ​eat. In fact, these foods need to be avoided at all costs. Consumption of these could have negative effects ranging from slight indigestion to eventual death.​​​

Typically very small amounts of most of these foods won't have lasting effects. It's always better to be safe than sorry, though.

​How To Properly Feed Your Ferret

​​​First of all, the digestive system of a ferret is incredibly short and their metabolism is very fast. Therefore, there should always be food ready for them to eat whenever they're hungry. Usually ferrets have good control and only eat when they're hungry, so they should stay at a healthy weight with a constantly-full bowl.

In addition to feeding ferrets frequently, you should know that they're picky. Ferrets are known to imprint on food and not accept another food that you try and switch them to (to the point of starvation). Because of this, it's recommended that you supply your ferret with a mix of two or more different foods to keep things diverse.

This is where the cat food and ferret food combo comes into play.

​You should also always stay observant of your ferret. If they're eating a certain food and don't look particularly healthy, it may be a good idea to re-evaluate their nutrition. Don't be afraid to change things up if they don't seem to be working out.

​As stated, it can be a bit intimidating to go online or go to a pet store and try to find the perfect foods for your ferrets. Fortunately, we've gone ahead and done the hard work for you.

Below we've highlighted the best ferret food, best cat food for ferrets, and best ferret treat. We've also analyzed their nutritional content to make sure that they're perfect for ferrets. 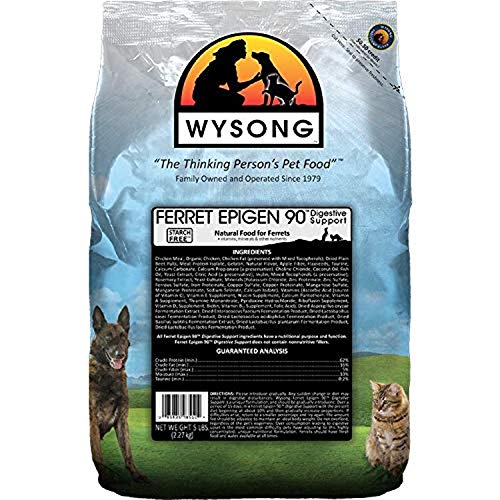 An overall excellent ferret food that's as close to a raw diet as you can get without actually going raw. Great protein and fat content while also having an alluring taste and great shape. Additionally, contains almost no undesirable ingredients besides an acceptable amount of beet fiber. 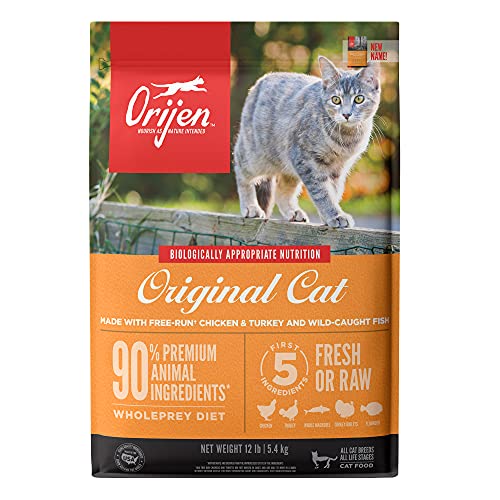 One of the favorite cat foods among ferret owners. Its protein and fat levels are perfect to mix with the Epigen food above, and its ingredients are also quite wholesome. One problem is that it does contain peas, but it's not a very prominent ingredient so it shouldn't be a big issue. Other than that, it's very wholesome and contains a lot of beneficial ingredients.

Ferretone Skin / Coat Supplement
This is one of the best ferret treats out there. Not only do ferrets absolutely love licking some of this off of a spoon, but it's also quite healthy. It contains essential vitamins and fatty acids that contribute to healthy skin and fur in ferrets. Skin problems aren't rare in ferrets, so this is an affordable way to help avoid those and keep your ferret's diet interesting.
View on Amazon

​Hopefully by this point you know just what ferrets eat and what you should be feeding your ferret. Fortunately it isn't a very difficult concept to grasp.

Ferrets are meat eaters and their diet needs to reflect that. They need high-protein, high-fat foods that are close to a natural diet. Two or three foods should be combined to round out the nutrients and keep a ferret from imprinting on a particular food.

Ferretone or salmon oil should also be provided to diversify the diet even further and promote healthy skin and fur.

Certain foods should be avoided, such as fruits, vegetables, and carbohydrates, but it isn't hard to avoid these.

By feeding your ferret a diet like the one highlighted above, you'll be providing it with the nutrition that it needs to live a long, healthy, and very playful life. What ferret owner doesn't want that?​