While tarantula keeping is definitely not a hobby for everybody, it can be quite rewarding for some people. Although there are hundreds of different tarantula species that exist, most tarantula owners have at one point owned or handled a Pink Toe Tarantula. This species, also known as Avicularia avicularia, is quite a popular tarantula and a favorite among beginner and experienced tarantula keepers.

If you would like to bring an Avicularia avicularia into your home, there are a few key pieces of information that you should know about this incredible species. Let's take a look at the appearance, personality, and environmental requirements of Pink Toe Tarantulas.

Pink Toe Tarantulas were quite aptly named, getting their name from their trademark pinkish-orange "toes" on the bottom of their legs. In addition to those toes, they have a large, mostly black body that's more hairy than a good majority of tarantula species. There's also some green iridescence on the hard shell of their upper body, adding a beautiful shine.

In normal or low lighting, this species doesn't look extremely unique from other tarantulas. However, its details really come through when exposed to good amounts of light, making it quite photogenic.

In terms of size, Avicularia avicularia are a little bit smaller than average for tarantulas. They start off as relatively small slings, and they grow at an average rate for a tarantula. When fully grown, females have a leg span of 4.75 inches while males average around 3.5 inches. The temperament of the Pink Toe Tarantula is what makes it the optimal species for beginners when it comes to tarantulas. These tarantulas are native to South America and arboreal, meaning that they live in trees. This has resulted in the Pink Toe Tarantula having surprising agility, but don't let this scare you away -- they mostly leave this trait in nature where it's needed.

In captivity, Avicularia avicularia are quite docile and make for an optimal pet. While many tarantula species don't do well with handling, this species seems to be an exception. Many owners have no problem handling their Pink Toe Tarantula. While it's possible to do, it still isn't recommended that you handle a tarantula, no matter how docile they may seem.

However, as they are still animals, they do have some quirks that owners should be aware of. Although it's rare, Avicularia avicularia can jump out of their owner's hand and onto the floor. Since falling is the most common injury in tarantulas, you'll always want to handle your spider just over the floor or a table -- never more than a foot or two in the air.

Additionally, if threatened, this tarantula can flick their short hairs at you in an act of self-defense due to the fact that they're new world tarantulas. Biting can also happen, but it's very rare (and exceptionally harmless).

The problems noted above aren't really problems if you're acting as a responsible owner, though. So, looking at the overall temperament of Avicularia avicularia, it's quite clear why it's such a popular and beloved species around the world. 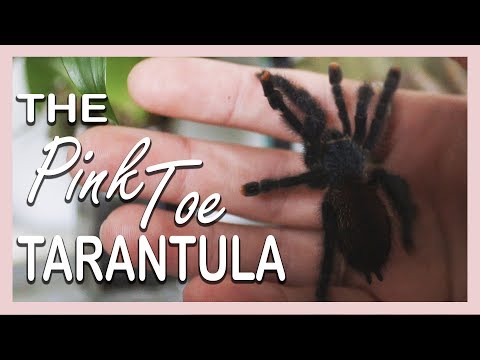 If you're about to bring home an Avicularia avicularia, you first need to ensure that all of their environmental needs are being met through their enclosure. Since this species of tarantula is arboreal (meaning it lives in trees), it needs an enclosure that's taller and provides different mediums to climb on.

Other than that characteristic, there isn't too much separating a Pink Toe Tarantula from other species of tarantula in terms of what they need.

While Avicularia avicularia has specific needs for their enclosure, they aren't very difficult to meet. First of all, Pink Toes are arboreal tarantulas, so they'll need an enclosure that focuses more on height than floor space.

Since Pink Toe Tarantulas don't grow to be too large, an average-sized enclosure should work for adults. Exo Terra's "mini tall" terrarium is 12"x12"x18" and should be big enough for most specimens unless you have a particularly large adult female.

This terrarium is tall enough for Pink Toes to make a sizable web towards the top, and the side opening helps to protect the web from being damaged while accessing the enclosure. Inside the terrarium you should have about 2 to 3 inches of moisture-retaining substrate, some sphagnum moss, a sizable hide, a small water bowl, and some logs, sticks, and plants to climb on.

There isn't much else Avicularia avicularia requires in their enclosure! It should be noted that if you want two or more specimens, it's possible to share an enclosure, but they can become territorial and resort to cannibalism. Therefore, most owners simply keep each tarantula in its own enclosure. 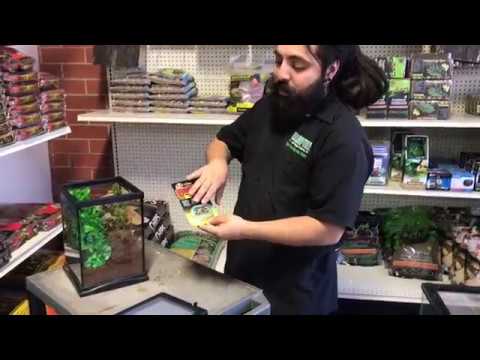 In the wild, Pink Toes experience quite a diverse array of temperatures ranging from around 60°F to 80°F. This has resulted in quite a hardy species of tarantula!

Despite their ability to survive through these conditions, the recommended temperature in their enclosure is between 78°F and 82°F. Fortunately, this is room temperature for a lot of people, so additional heating won't be necessary in most households.

If your home does stay a few degrees cooler than 78°F, then you may have to resort to supplemental heating. There are two options here -- either heat mats or heat lamps. Heat mats aren't recommended for Avicularia avicularia, or any tarantula for that matter, as it can actually cause burns to their feet. Therefore, a gentle heat lamp is recommended to keep the enclosure a comfortable temperature.

In addition to heat, Pink Toes need about 65% to 75% humidity in their enclosure to mimic their natural environment. This number is a bit higher than other tarantulas, so it seems a bit intimidating to maintain. However, it's fairly easy to keep consistent by spraying the enclosure with a spray bottle every couple of days.

Feeding your Pink Toe Tarantula is quite a simple task as captive tarantulas don't need to have complex diets. Adult Pink Toes eat about 2 to 3 adult crickets a week. These crickets will essentially provide all of the nourishment that a Pink Toe Tarantula needs to be healthy. However, there are things that you should know.

First of all, half of tarantula feeding lies in the hunt. Therefore, you always need to feed your Avicularia avicularia live crickets. This requires you to not only keep your tarantula alive and well, but to also keep an entire box of crickets alive! Fortunately, a decently-sized box of crickets is fairly cheap and can survive for a long time off of small pieces of fruit or cricket feed.

Feed your tarantula at night, and clean out their cage of any uneaten food to prevent it from rotting. Tarantulas can also be given small lizards of pinky mice as rare treats, and the carcasses of these will need to be cleaned out quickly.

Fortunately, if you keep your Pink Toe Tarantula in a good enclosure, you shouldn't run into any health issues over their lifetime. Tarantulas suffer from very few illnesses in captivity. The most common ailments in a tarantula are mites and dehydration -- both of which aren't complex problems to deal with.

Mites can simply be physically removed most of the time, and dehydration is easily avoided by always providing a source of clean water and by adequately misting the enclosure.

The most common issue that owners may experience is the molting of their Pink Toe Tarantula. While a tarantula can appear sick during this stage, most of the time it's entirely fine. The molting process is a bit slow and tedious, so give your tarantula a good amount of time to go through it.

Occasionally a tarantula may run into a problem with their molt and not finish it. In this case, the owner may have to physically help the tarantula remove their ​exoskeleton, which is a necessary but sometimes dangerous process in this scenario. Fortunately, there is plenty of good advice available when it comes to helping a tarantula molt. 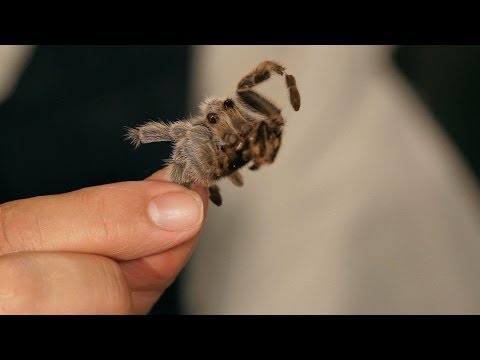 Avicularia avicularia used to be a lot more common in pet shops, but their importation has declined a bit since the 1990s. Thus, it may seem difficult to acquire a Pink Toe for yourself if you're only staying local. Fortunately, there are plenty of breeders all over the world that make this tarantula species widely available and affordable.

Popular marketplace websites such as Underground Reptiles and Backwater Reptiles both have healthy Pink Toe Tarantulas available for quite a low price. You'll tend to find this species being sold for between $20 and $30 including a guarantee for their safe arrival and good health.

This extremely low price for such a fascinating and friendly tarantula is what has helped Avicularia avicularia become a staple in the collections of many tarantula enthusiasts. For such a small amount of money, you can purchase an incredible specimen that will live for almost a decade and will never grow old or boring.