When you’re looking at tarantula species, it’s easy to find yourself a bit puzzled. There are many types out there, which makes it completely understandable that this native Brazilian is often lost in the crowd.

These uncommon, glossy tarantulas might not have as many fans as other tarantulas, but that doesn’t make them any less fascinating.

With this care sheet, I’m going to cover a lot of ground concerning this tarantula, such as its temperament, diet, and optimal enclosure setup.

This tarantula derives its common name from its appearance. Often called the Brazilian Wooly Black or the Brazilian Red Rump, this black velvet creature has a distinctive red abdomen.

However, its red rump loses a bit of its distinction as it matures. Fortunately,Grammostola actaeon keeps its elegant flair with its dark coat and stocky limbs.

As for the rest of its body, it’s covered in sleek black hair. This makes it look particularly sophisticated, especially after a recent molt -- a trait that's common in other Grammostola tarantulas.

You may think it’s similar in appearance to Grammostola pulchra, which shares a darker look. However, the Brazilian Red rump is remarkably reminiscent of Grammostola iheringi as well. Quite a few similar looking tarantulas, aren't there?

One significant difference is that Grammostola actaeon loses its red rump during maturity, while the Grammostola iheringi keeps it.

If you want to be impressed, try looking at a Brazilian Red Rump in natural sunlight. They’ll give off the most magnificent smoky hue, with a faint metallic smolder.

When it comes to size, these tarantulas aren’t a fast-growing species. However, they boast a large, bulky build. A female Grammostola actaeon ranges between 6-8” in legspan. If you're looking for a very laid-back and friendly tarantula, especially if you're a beginner, this is the way to go. Grammostola tarantulas are new world tarantulas, which are tarantulas that are known for their agreeable temperament. They’re usually docile and slow-moving.

Does the Grammostola actaeon live up to this reputation? Yes, it does.

It’s not generally skittish. Brazilian Red Rumps are mellow and usually just want to chill around. However, they can be defensive if they need to be. They just often choose to run away from danger as opposed to fighting it.

When compared to the Grammostola iheringi, the Brazilian Red Rump has a much more calm and agreeable temperament. G. iheringi is often described as "fiesty". It’s also slower.

They’re a gorgeous, uncommon species that are accepting of ordinary interaction. However, they’re not as tolerant as a Grammostola pulchra.

Handling usually varies from one type to the other, but after a while, you should be able to move it around the enclosure with your finger instead of an object.

Despite this, handling your Grammostola actaeon isn’t recommended in general due to the possibility of an accident. I’d suggest that you wait and see your tarantula’s personality has before handling it.

One reason behind why people love this tarantula is that it's very easy to care for! All that you need to do is provide it with a suitable enclosure and decorate it accordingly.

It's very forgiving, so don't stress too much about this part. 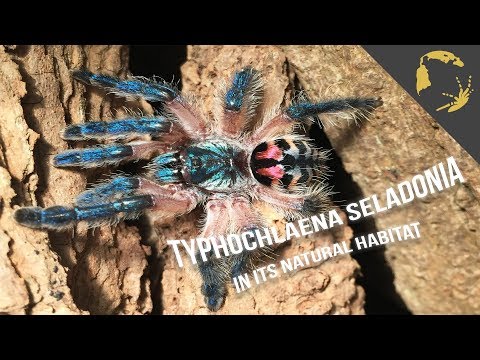 This is a terrestrial tarantula species, so your focus should be on providing it with plenty of floor space and depth for burrowing. A simple terrestrial enclosure setup is more than acceptable for this species.

Two enclosures that we would recommend are the Exo Terra 18" × 18" × 12" terrarium and the Repti Zoo 20" x 12" x 10" enclosure. Both of these enclosures are great with plenty of floor space, accessibility, visibility, and ventilation. All of theses traits are very important for an enclosure.

Spiderlings can be kept in smaller enclosures than this, but they should be transferred as soon as they near their juvenile stage.

There are some supplies that should be present in your Grammostola actaeon enclosure in order to make it as suitable as possible.

To begin with, the bottom of the enclosure needs to be layered with about 6 inches of moisture-retaining substrate, such as coconut fiber. This not only allows for burrowing, but it also works to maintain humidity within the enclosure.

Additionally, a tarantula hide needs to be provided so that your G. actaeon can seek refuge within it when they feel scared or stressed. A piece of cork bark or coconut shell works great for this.

Finally, it's imperative that you supply your tarantula with a water dish. This dish needs to be cleaned and filled consistently. Water dishes help prevent dehydration and also contribute to an enclosure's humidity.

A Brazilian native, the Grammostola actaeon lives in the state of Paraná. This Brazilian state sits atop 600-800 meters, which results in a decently mild climate.

If your home gets much colder than this, you may have to provide supplemental heating through the use of a space heater.

Humidity should also be kept at 65-70%. This is a fairly standard range for tarantulas, and it's quite easy to keep humidity levels around this range.

All that you have to do is mist the substrate occasionally and keep the water dish filled. This species loves dry substrate, though, so be sure not to overdo it. Just a very light misting is necessary.

These tarantulas are ferocious eaters. This only makes them more fascinating. A healthy Grammostola actaeon diet would consist of live food insects. This includes mealworms, dubia roaches, locusts, and crickets.

Tarantulas are generally opportunistic eaters. Brazillian Red Rumps are fierce eaters in particular. They’ll eat whatever you give them.

The amount by which you feed your tarantula should mostly depend on its size. For example, if your Grammostola actaeon is 1-2 inches across its body, one or two crickets a week is entirely sufficient.

Fully-grown adults can eat around 5 adult crickets per week. 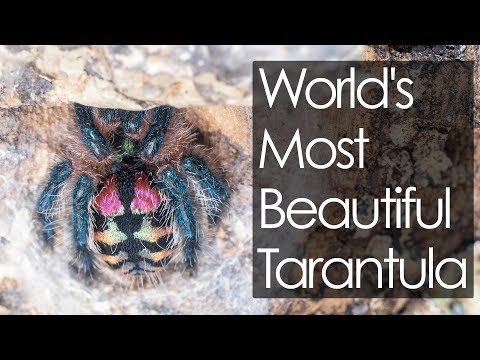 Pet tarantulas that are kept in captivity rarely, if ever experience health problems. As long as their enclosure is optimal and their diet is complete, it's likely that they'll live long and problem-free lives.

However, health problems can occur.

One common occurrence is dehydration, where a tarantula enters a death curl because they're lacking water. This can be avoided easily with access to a water dish and consistent misting of the enclosure.

Another health problem that may arise are mites. A mite infestation isn't incredibly dangerous initially, but it should be dealt with as soon as possible. Fortunately, mites are easily prevented and removed.

Unfortunately, this isn't an incredibly common tarantula because there's a surprising lack of hype for it. This results in it being slightly difficult to find and makes it fetch prices that are a bit higher than other species. It's certainly not expensive, though!

As stated, this isn't incredibly cheap, especially when considering the other costs of tarantula ownership, but it's not super expensive.

Regardless of the price, this is a great investment for a tarantula! It has a beautiful appearance and a temperament that's world-class. If you can find one for sale, I would definitely recommend that you purchase it.