Of the 800 different species of tarantulas discovered so far, Brachypelma klaasi is perfect for pet owners who want something exotic that doesn’t require much in the way of care.

The unique physical appearance of this tarantula makes it extremely popular among exotic pet enthusiasts. The tarantula has a dark body that is clothed in bright, pink priestly hairs- giving it a distinguished frame. The only difference between a male and female tarantula is that the latter only grows to six inches.

Despite being so flashy, these spiders are known to be well-camouflaged in their natural environment, making it difficult to spot them on most substrates. The spiderlings have slight orange hues that evolve into pink colors as they reach adulthood.

Unlike other spider species, Brachypelma klaasi is a long-living, slow-growing species. The females are known to live for as long as 30 years, while the males live for only 5 years! Brachypelma klaasi is a new world tarantula, which are spiders known for their less aggressive and skittish personalities and preference to hide from confrontation instead of engaging in combat.

Thanks to its overly docile nature and cute appearance, the Mexican Pink Tarantula is easy to handle by beginners, although this isn’t recommended. It is so gentle that bites are exceedingly rare and almost never reported. This leaves researchers with little incentive to explore the venom and sensation of the tarantula’s bite, although it is likely to be very similar to other members of Brachypelma -- non-threatening.

Brachypelma klaasi is known to retreat to their burrows in the presence of predators. However, adults aren’t nearly as skittish and won’t make excessive burrows when they feel unsafe. Like other members of the Brachypelma family, their primary defense system lies in their urticating hairs that they can kick from their abdomens and hurl into their attackers.

On humans, this will feel like an itchy sensation that will soon develop into a mild rash. Barring hypersensitivity, the urticating hairs are completely harmless unless they get in the eyes.

Unlike other tarantulas, Brachypelma klassi is active when humans are awake. They patiently lie in wait to ambush their prey as they come to them but have been known to travel away from their burrows in search of food such as small animals and insects.

Like most species in the Brachypelma family, the Mexican Pink Tarantula does not demand much in the way of a complicated enclosure. You can easily make use of a range of different containers as a makeshift cage. However, you should keep in mind that these are terrestrial tarantulas that have unique burrowing traits, so a long and wide enclosure is necessary. 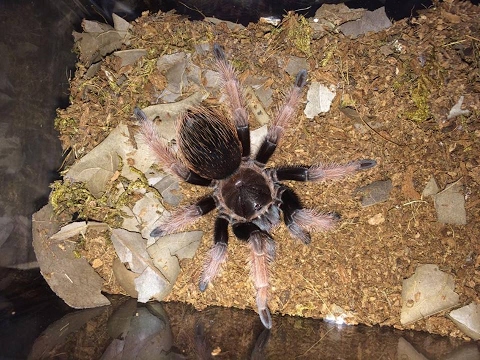 Since the Brachypelma klaasi is a moderately-sized tarantula as an adult, it achieves a medium leg span of around 5”. You don’t need a huge cage, something around 18” x 18” x 12" would do just fine for this species. That being said, it is preferable to set up a larger cage that can allow the Brachypelma klaasi to mimic its natural habitat where it’s free to weave intricate webs inside and outside of its burrow.

We don’t recommend anything smaller than 12” x 12” x 12” for this species as it could drastically restrict their movement. The ideal cage lets you easily add borrowing opportunities and suitable hides for the tarantula. Exo Terra glass terrariums make for an excellent choice since they combine excellent visibility with lots of ventilation.

The Brachypelma klaasi prefers to burrow in the wild. The same applies in captivity since this species is fond of hiding away from sight. This is why it is recommended to provide at least one suitably sized hide that allows the Brachypelma klaasi to hide. Other than the hide, you don’t need to provide complicated supplies. It is important to place a water bowl from which your tarantulas can drink.

And if you’re feeling generous, try placing two hides, one at the cooler end of the cage and the other at the hot end, letting your tarantula pick a hiding spot. Since the Brachypelma klaasi are terrestrial tarantulas, make sure the cage includes at least six inches of tarantula substrates with peat-free compost or coconut fiber.

Both young and adult Mexican Pink tarantulas prefer warm and dry environments. It is recommended to spray the cage with a sprayer specially designed for use with exotic pets. Make sure to spray at the walls instead of the tarantula.

The water will gently evaporate, temporarily increasing the humidity of the environment. The cage for your tarantula should decent ventilation to allow the moist air to escape.

Since the Brachypelma klaasi is native to warm areas in Mexico, you should provide a suitably warm environment with temperatures between 78 to 82 °F. You may have to install a heater during colder months. It is a good idea to make one end of the cage hotter while leaving the other without heat. This creates a temperature gradient allowing your tarantula to choose the area that suits it best.

The Brachypelma klaasi likes its food. Unfortunately, this does not translate to fast growth rates. Adults would eat once every week while juveniles that are still growing will eat two to three times each week. These tarantulas prefer a diet of live insects such as medium-sized crickets and dubia roaches.

They will stop eating at random around a molt. During this sensitive period, you should remove any uneaten food. A pair of long forceps may come in handy for this purpose! 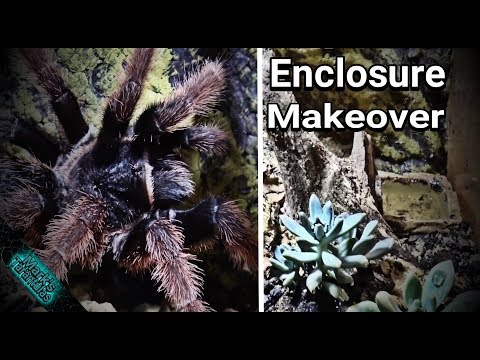 As far as we know, the Mexican Pink tarantula is not especially vulnerable to any illnesses. However, it is susceptible to internal injuries due to its bulky frame. These tarantulas may feel stressed if they don’t find a place to burrow into. But other than that, just make to control the temperature and humidity levels to avoid dehydration and mite infestation.

It isn’t advised to handle these tarantulas from a height because if they will rupture their abdomen upon crashing on a solid surface. So handle with care!

Brachypelma klaasi are incredibly rare species and are considered endangered due to their slow growth rates. This makes them rather expensive to acquire. If you happen to find a specimen for sale, make sure to snap it up before someone else beats you to it! Most online vendors sell them from $110 to over $300 depending on the location.

The steep price tag is justified, given the exotic appearance and gentle nature of these incredibly friendly tarantulas. 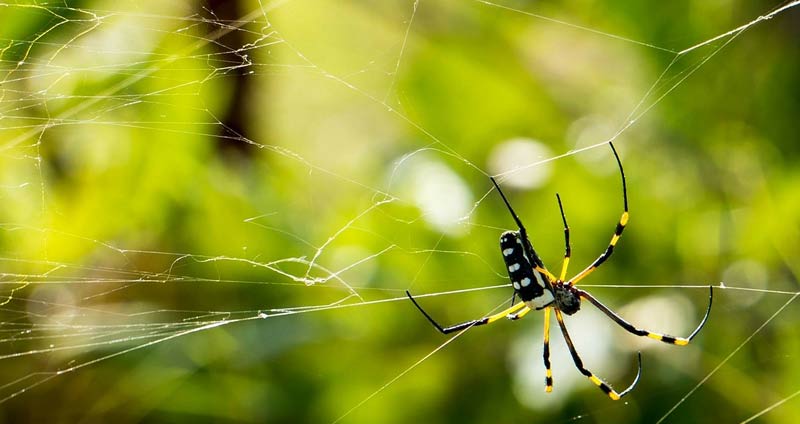