​Tarantulas exist in many different shapes and sizes with an array of personalities. If you're looking for a tarantula on the far left of this spectrum -- a very small tarantula with an equally small personality -- then look no further than ​Avicularia minatrix​! Often considered a dwarf tarantula, this species is small in size with some very interesting personality quirks.

Whether you're just interested in learning more about this species or you plan on keeping one in the near future, this care sheet will tell you everything that you need to know about this spider. While they are small, they do have specific care requirements that need to be met.

​First and foremost, this is a very small tarantula. In fact, it's the smallest species within the ​Avicularia​ genus! As fully-grown adults, these tarantulas only grow to have a legspan of about 3 inches, which is easily one of the smallest tarantulas available today. Spiderlings are even smaller, measuring at or under half an inch legspan.

In terms of color, this tarantula is unique as it maintains much of the same coloration and patterning throughout its life. Spiderlings have more of a light tan and black coloration, though, while adults are more brown, black, and rusty-orange. Therefore, essentially the only difference between babies and adults is their size!

The most interesting coloration on this tarantula appears on its abdomen. It's a rusty-orange color with a thick black line running down the middle and branching off to the sides to create the appearance of a rib cage.​​​ ​While there are some tarantulas that are smaller in size but have a large personality, this isn't one of those tarantulas. This isn't too surprising, though, as small tarantulas are very susceptible to predators and other harmful things in nature.

​Avicularia minatrix ​is a new world tarantula, which are tarantulas that are known for being more laid-back, not wanting to bite, and preferring to take the flight over fight ​​​approach. New worlds are essentially the ​more friendly tarantulas, but sacrifice some of their entertainment value for their friendlier disposition.

This tarantula species is known for being quite skittish, non-defensive, and solitary. In fact, you won't have a lot of opportunities to closely observe and appreciate it! Many owners state that their specimen spends most of its time hidden away in its intricate and heavy webbing that fills its enclosure. So, if you're looking for a display tarantula, it's best to keep looking.

If you ever enter its enclosure, ​Avicularia minatrix ​will most likely skitter away and avoid any confrontation. However, it does possess the ability to flick irritating urticating hairs at you if it's really threatened. It can also bite in very rare instances, but the ​Avicularia​ genus has some of the weakest venom of all tarantulas.

Overall, though, this is a very simplistic tarantula that's easy to care for and will mind its own business most of the time.

If you want to bring home one of these tarantulas for yourself, you need to make sure that you're meeting all of their environmental needs with their enclosure. Additionally, because these tarantulas are quite skittish, it's best that you create an enclosure that needs to be interacted with as little as possible.

Avicularia minatrix comes from Venezuela, which has a climate that ranges from extremely dry from November to March to extremely rainy from April to October. Overall, they're used to temperatures in the high 70s, around 78°F, and humidity levels around 70%. 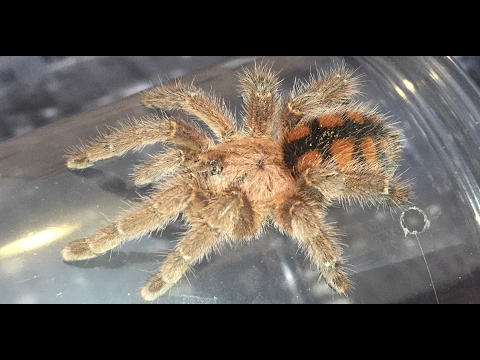 While this tarantula has needs that need to be met enclosure-wise, it isn't hard to meet those needs at all. To begin with, this is an arboreal tarantula species that spends most of its time above the ground in a tunnel of its webs, within sticks and leaves, or underneath a hide.

Because of this, the enclosure should be decently tall with plenty of space for this smaller tarantula to climb around and explore.

It's important to note that airflow is very important for this tarantula species. Therefore, you need to put an equal focus on height and breathability of the enclosure. An enclosure like this Exo Terra 8"x8"x12" terrarium is perfect for this smaller specimen, providing plenty of space, breathability, and accessibility.

Be sure to also include a water bowl at the bottom of the enclosure. Tarantulas need water to live, and it will help to keep them hydrated and keep their enclosure humid.

Be sure to monitor the temperature and humidity of the enclosure regularly. Heat lamps or space heaters can be used to raise temperatures if they drop too far. Additionally, spraying down the enclosure once or twice a week with water will help to keep humidity levels consistent.

These tarantulas are small and have a decently small appetite to match. However, this doesn't mean that they don't enjoy a heart diet consisting of a variety of bugs such as fruit flies, cockroaches, and crickets.

A. minatrix spiderlings should be fed flightless fruit flies due to their very small size so that eating is easy. However, as they grow larger, you can start feeding them 1/2" to 1" crickets and smaller dubia roaches. About two crickets per week seems to be the optimal amount of food for this tarantula.

Some owners have trouble getting their tarantula to eat due to the fact that they stay hidden in their webbing. If this happens to you, don't worry! Tarantulas may not be capable of very intelligent thought, but they will definitely eat when they're hungry. Don't drop prey into any web tunnels or hides as they may startle your tarantula. 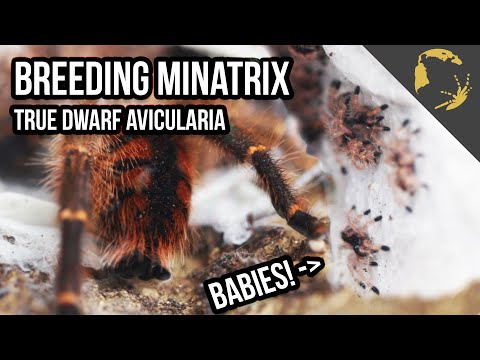 Avicularia minatrix is not a very difficult tarantula to care for -- much like most of the Avicularia genus. They're very hardy and absolutely thrive when kept in the proper conditions and fed a proper diet. The two main problems that plague captive tarantulas are dehydration and mites/parasites, but both issues are easily avoided and eradicated.

Two things should be noted with this species. First of all, it's a true arboreal, so that needs to be accommodated with their enclosure. If this tarantula can't climb and create webs and hides above the ground, they may get stressed out and experience negative health effects.

Additionally, every tarantula can experience problems with their molt. As long as the temperature and humidity is appropriate, it will likely happen flawlessly -- but the potential is there.

If your tarantula gets stuck during a molt, you'll need to help them complete it. Fortunately, there are many guides online that walk you through exactly how to get your tarantula through a problematic molt and come out fine.

While this is one of the smaller tarantula species out there, it's certainly not one of the cheapest. Its unique appearance and unusual behavior makes it a highly-appreciated tarantula among enthusiasts. It isn't extremely popular or mainstream, but it still fetches a decent price.

There are several online marketplaces and breeders that sell Avicularia minatrix for a range of different prices. Spiderlings are typically sold for around $50 to $60, while adult females can easily go for $100+. These prices typically include shipping and a safe arrival guarantee, but it's still a substantial amount of money for a tarantula.

Regardless, even if you spend $100 for this tarantula, it's $100 that's well-spent! There aren't many species that are this small and behave so uniquely. Many owners proudly state that the Venezuelan Redstripe Pink Toe Tarantula is their favorite tarantula in their collection, and there's a good chance that you could be saying the same thing.