The Ivory ball python is an incredibly interesting morph that people around the world are in love with. It's a python that stands out from the rest and makes it desirable for breeders and collectors alike.

The physical traits of this morph are often used to create some fascinating offspring. For this reason, the Ivory ball python has made a place for itself in reptile history.

History Of The Ivory Ball Python

For such an interesting ball python, the Ivory morph doesn't have a very extensive history! It was first proven back in 2003 by the Sutherland family of TSK, inc. As soon as this morph was made known, it was admired for its very unique style.

Ivories have a chance to be made when two Yellow Bellies are mated together, and the stark difference in appearance between these two morphs made the Ivory even more appealing.

As time has gone on, Ivory ball pythons have become used quite a bit as a combo maker. Their yellow-tinted white color combines beautifully with the colors of other morphs to create awesome designer morphs.

The slight rarity of Ivories has also contributed to their popularity.

​The genetics of Ivory ball pythons are quite simple. The Ivory is the super, or homozygous form of the Yellow Belly, ​making it a fairly straight-forward morph to create. This morph differs from a lot of other super forms as the difference between Ivories and Yellow Bellies is night-and-day.

Therefore, it's quite a simple process to create an Ivory, but the odds aren't exactly optimal. This results in quite a few Yellow Bellies and normals being produced in order to get a single Ivory. 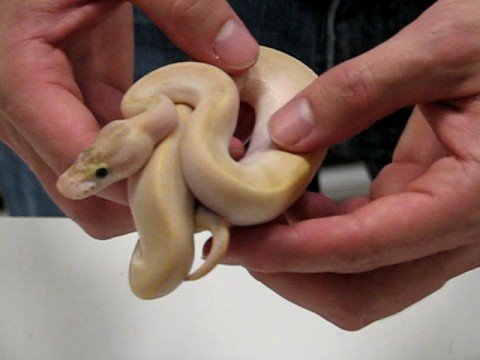 You can regularly find standard Ivory ball pythons selling for between $200 and $300. This price is higher than more common morphs like the Spotnose, but it's still affordable enough to find its way into many peoples' collections.

The combos that Ivories create, though, is what can cause prices to skyrocket. There are many Ivory combos from many breeders across the world that sell for between $300 and $3000+!

With an Ivory's "rarity" and unique appearance, they're capable of creating some ball pythons that are worth a lot of money.

The Ivory ball python may be the super form of a Yellow Belly, but it shares almost none of the same characteristics. Ivories are defined by their off-white, patternless scales and a pale yellow stripe running down the length of their back.

The morph that's closest in appearance to an Ivory is a Leucistic, but even then there's quite a disparity in their features.

This creates a subtle morph that can either be appreciated for what it is or combined with other morphs to add even more subtle undertones.

Ivories are morphs that are stunning by themselves and combined with another morph. For this reason they're quite highly desired and are certainly appreciated by many snake enthusiasts.